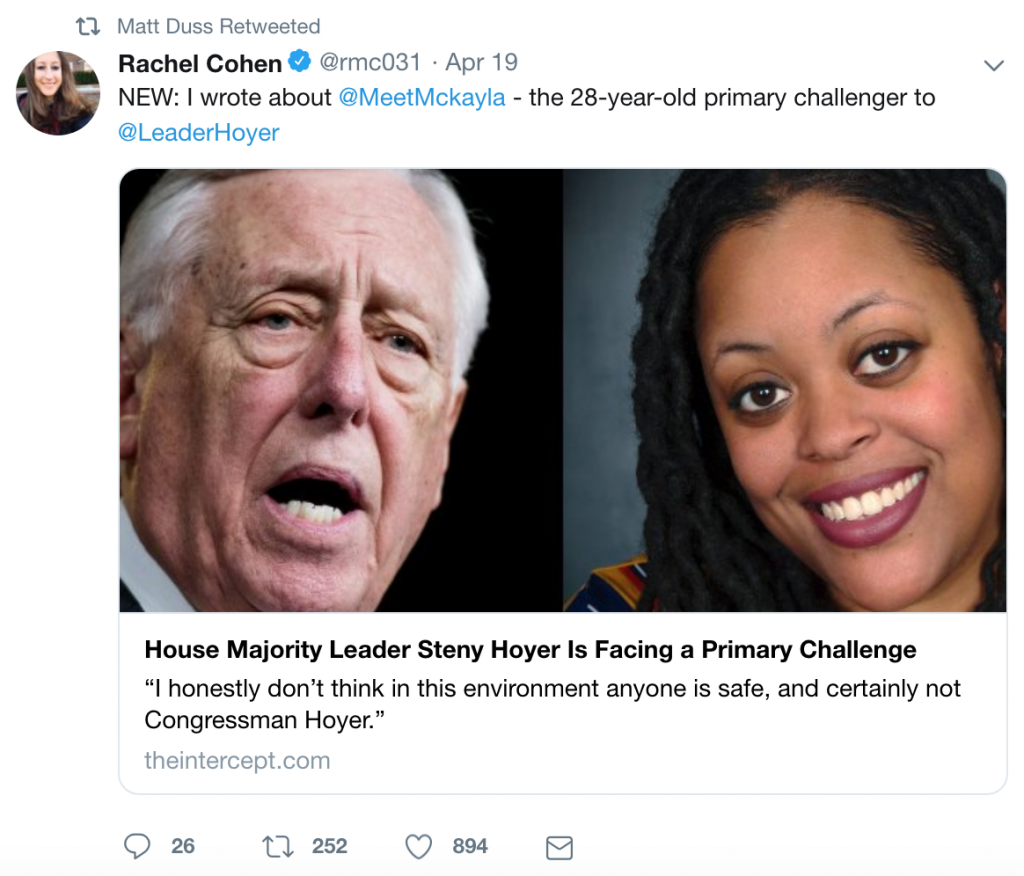 Wilkes told The Intercept she is challenging Hoyer because she believes that his tenure in the House of Representatives since 1981 has put him at too far a remove from the American people, and she would like to see more "relatable people" in Congress.

"We need someone who will be a voice for us, who knows what we go through as daily constituents, and Steny Hoyer has been in office so long he's never really had to be a regular constituent," she said.

Wilkes's challenge comes in the wake of a number of Democratic primary upsets, most notably freshman Alexandria Ocasio-Cortez's (D., N.Y.) primary victory over former Chair of the House Democratic Caucus Rep. Joe Crowley (D., N.Y.) in 2018. Upsets like Ocasio-Cortez and fellow freshman Ayanna Pressley (D., Mass.) have made some members of the Democratic establishment more cautious about primary challenges: After the 2018 midterms, the Democratic Congressional Campaign Committee announced it would cut off any firm that supported primary challengers.

Ocasio-Cortez campaign staffer Waleed Shahid told MSNBC's Headliners in early April that Sanders's 2016 run allowed candidates like Ocasio-Cortez to realize the possibility that they might have a chance against establishment Democrats.

"I think Bernie Sanders really opened the debate for democratic socialism in this country. So it's not as fringe as you might think. In fact, what's becoming fringe is if you call yourself a capitalist openly," he said.

Wilkes has ramped up her criticism of Hoyer in the past few weeks, calling him a "coward" for not being quick to defend Rep. Ilhan Omar (D., Minn.) after President Donald Trump tweeted a video responding to her comments about the 9/11 terror attacks on the World Trade Center.

"We can't risk Trump running in the next election," Wilkes told The Intercept. "He simply needs to be stopped, and I don't understand why Democratic leadership is denying this."