'I would love to see that woman metaphorically castrated'

Rena Marrocco, a Democratic donor and delegate, over the weekend provided further insight into her Facebook post last week that said Secretary of Education Betsy DeVos "deserves" to be the prisoner of a sadist, rapist character on HBO's "Game of Thrones."

Marrocco called DeVos "human pollution" in a Facebook post last Thursday, adding that she "deserves to be a prisoner of someone like Ramsay Bolton," the fictional "Game of Thrones" character known for raping and torturing women for sport, the Washington Free Beacon reported.

Marrocco donated nearly $2,500 to Sen. Bernie Sanders (I., Vt.) during the Democratic presidential primary between 2015 and 2016. She also donated $2,700 to Sen. Kamala Harris' (D., Calif.) campaign, which is the maximum amount donors can give per election cycle to an individual candidate.

After receiving backlash for her comments, Marrocco sought to clarify them in another Facebook post on Saturday. Marrocco provided in-depth backstories on two "Game of Thrones" characters, but still indicated she wants DeVos to be tortured.

"These mouth breathers are now saying that I was advocating that Betsy DeVos be raped. That character from ‘Game of Thrones' got a lot of press because in the story he married Sansa Stark and then raped her on their wedding night," Marrocco wrote. "However, what he was known more for was his treatment of his prisoner, Theon Greyjoy. He castrated, broke, and tortured that man in thousands of horrific ways for year—his torture of Theon went well beyond his physical treatment of him."

Marrocco added that she would "never advocate or wish rape on anyone," but would "love to see that woman [DeVos] metaphorically castrated or rendered impotent of her power to harm anymore people with her position."

Marrocco's comments about DeVos were a response to an article from the Hill initially titled "DeVos uses private jet for work-related travel." The headline was changed for its misleading nature after DeVos' office clarified that she uses her privately owned jet to travel, which she pays for herself. Taxpayers also do not pay DeVos' salary, despite what Marrocco claims. DeVos told the senators at her confirmation hearing back in January that she would only ask for a $1 salary if confirmed.

Several Facebook friends responded to Marrocco's post about DeVos, with one wishing the latter would lose her voice and be fired.

"So sort of a hybrid of vocal and professional castration?" Marrocco asked.

"I can't see any other meaning behind what you said except for [rape]. Of course it was about her getting brutally raped what else would it mean [sic]?" another friend said, noting that he is a rape survivor after Marrocco criticized his response.

"When I wrote that, Sansa didn't even cross my mind. Instead, I was thinking about what he did to Theon and specifically, the castration," Marrocco said. "To me it was an appropriate symbolism of what I'd like to see happen to her with her power as it relates to this political position she's in." 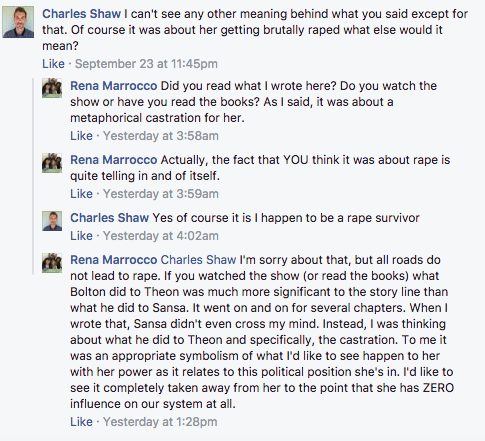 Marrocco later accused DeVos of causing the "death" and "destruction" of the poorest nations on earth by flying her private jet.

"She flies her private jet on a very frequent basis which is causing the death and destruction of the most vulnerable and poorest nations on earth," Marracco wrote. "In addition, she's trying to dismantle the very institutions that will give us the tools to combat this problem. I want this woman politically castrated—meaning I want her removed from office."

"And she deserves to be humiliated for her actions," Marracco added. "Again, I would say that's a metaphorical torture. And I think she deserves that."