MSNBC host Rachel Maddow and several of her peers falsely accused the White House of editing out a damaging question from the transcript and video of the Helsinki press conference with President Donald Trump and Russian President Vladamir Putin.

The Atlantic first reported last week that the White House transcript and video from the conference was missing part of a question from Reuters reporter Jeff Mason. "President Putin, did you want President Trump to win the election and did you direct any of your officials to help him do that?" Mason asked.

"Yes, I did. Yes, I did. Because he talked about bringing the U.S.-Russia relationship back to normal," Putin responded in Russian.

But in the official White House transcript, Mason's question just reads "And did you direct any of your officials to help him do that?" The Atlantic wrote that it was unclear whether the omission was intentional or not, noting that "transcripts published by the Federal News Service and Bloomberg Government mirror the White House transcript."

On Tuesday, Maddow gave the story new life and insisted the White House intentionally edited out the exchange. "We can report tonight that the White House video of that exchange has also skillfully cut out that question from the Reuters reporter as if it didn’t happen," she said.

"The U.S. government [is] essentially following the Kremlin’s playbook in maintaining that something we all saw happen with our own eyes, we all heard happen with our own ears, has nevertheless disappeared, like old political opponents being airbrushed out of photos," she intoned.

Maddow's segment was hyped by both MSNBC and her fellow MSNBC hosts. 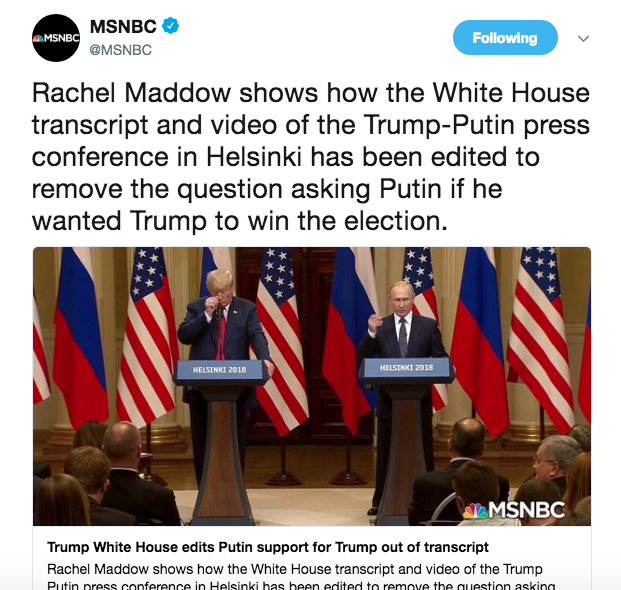 Host Stephanie Ruhle said in response to Maddow's accusations against the White House that "we ALL deserve better than THIS." 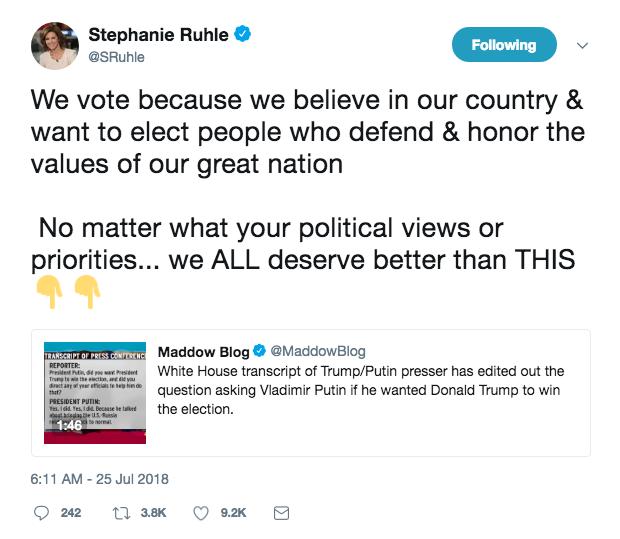 But the discrepancy between different transcripts and videos is easily explained. Mason began asking his question while Putin's answer to the previous one was still being translated. A White House official told CNN reporter Abby Phillips that they just didn't have time to switch over the audio in time for the first half of Mason's question, and the transcript and video were based off that audio.

In the WH feed you can only hear the translator until Mason starts saying "and did you direct any of your officials to help him do that?"

A WH official tells me that the audio feed used to produce both the video AND transcript did not have Mason's audio turned up in time.

The Washington Post – not a likely co-conspirator for the president – also omitted the first part of Mason's question from its transcript and video. "We did not edit the question out," reporter Phillip Bump wrote in response to the Maddow segment. "This is the feed we were provided."

"This is not a conspiracy from the White House," Bump continued. "While the White House certainly has a track record of misrepresenting facts, this would have been a remarkably futile revision of reality to attempt. As it turns out, they didn’t."

In addition to Maddow, CNN also spread the Trump edit conspiracy. "New Day" host Alisyn Camerota insisted that the question was "deleted from the transcript" because "they don't want the public to see that anymore."