Prominent and powerful Kentucky Democrat Jerry Lundergan was indicted Friday for making a series of illegal campaign contributions to his daughter's campaign.

Lundergan Grimes, who serves as Kentucky's secretary of state and has hinted she might run for governor in 2019, responded to the allegations on Twitter, promising her father would be vindicated.

These allegations started as a result of a politically motivated complaint filed against my campaign nearly five years ago. That complaint was already investigated and completely dismissed by the bipartisan Federal Election Commission. 2/4

I love my father, and I have faith in the judgment and fairness of the people of Kentucky, and believe when all of the facts are in, my father will be vindicated. 3/4

Lundergan served three terms in the Kentucky House of Representatives, and twice served as chairman of the Kentucky Democratic Party. His final state house term ended in 1989 after he was convicted of using his political influence to secure a no-bid government contract for his catering company. The conviction was late overturned on appeal.

The Lexington businessman soon regained political power by becoming an early supporter and personal friend of Bill Clinton. In 2008, he served as state chairman of the Hillary Clinton presidential campaign. Both Clintons would later campaign for Lundergan Grimes in 2014. 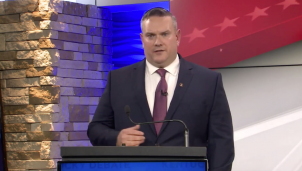 Decision Day For Civil War Between Far Left and Establishment