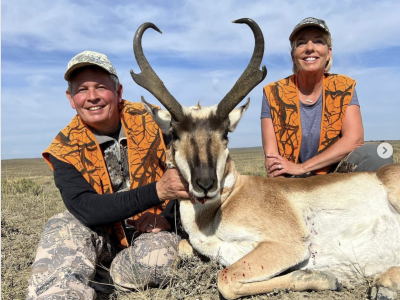 Montana this month ended its relationship with a law firm that has deep ties to the Democratic Party, a victory for conservative legal figures pushing other red states to stop doing business with the firm.

The firm, Motley Rice LLC, has a healthy portfolio of red state clients, even though its partners have long histories of work for left-wing causes and have given millions of dollars to Democratic politicians. Conservative legal leaders are pushing other Republicans to follow Montana attorney general Austin Knudsen's lead and stop doing business with the stalwart Democratic outfit.

"I applaud Attorney General Knudsen's decision and I hope other states will follow his example," Carrie Severino, chief counsel of the Judicial Crisis Network, told the Washington Free Beacon. "Too many AGs are allowing leftwing trial lawyers to use the power of the government to enrich themselves and their liberal dark money allies at the expense of the rule of law."

Motley Rice is a nationwide plaintiffs' firm that specializes in class action lawsuits and impact cases. It is handling disputes related to asbestos exposure, the weed killer Paraquat, and the 2010 Deepwater Horizon oil spill, among other matters. The highly lucrative practice has helped notch settlements as high as $1 billion.

The firm's lawyers donate prodigiously to Democratic candidates. They've contributed just over $2 million to Democrats since 2016, a huge figure for a firm of about 100 lawyers. The lone Republican among the 25 top recipients of Motley Rice contributions is Sen. Lindsey Graham (R., S.C.). The firm is headquartered in Graham's state.

But even as firm lawyers chipped in about $10,000 for Graham's reelection in 2020, they gave over $54,000 to his Democratic challenger, Jaime Harrison, who is now the chairman of the Democratic National Committee.

Firm lawyers also gave $127,000 to President Joe Biden's campaign. Motley Rice partner Joseph Rice hosted a fundraiser for Biden at his South Carolina home in February 2020. He's been mentioned as a candidate for an ambassadorship, a common reward for campaign bundlers.

All told, the firm's level of per-lawyer giving more closely resembles a Washington lobbying shop than a mid-sized plaintiffs' firm. Its total 2020 contributions are competitive with Perkins Coie, the firm that represents the Democratic Party and its most prominent members.

Knudsen terminated Montana's relationship with Motley Rice on May 14, according to a letter from his office obtained by the Free Beacon. The termination will take effect in September. His office said it wouldn't use taxpayer dollars to subsidize political groups that don't reflect the state's values.

"Attorney General Knudsen initiated a review of outside counsel contracts at the outset of his term to ensure Montana taxpayers are getting the best bang for their buck," Knudsen spokeswoman Emilee Cantrell told the Free Beacon. "We found that it was common practice for previous administrations to hand out millions to their liberal trial lawyer buddies, who then turn around and help fund left-wing political groups that Montanans oppose. We expect law firms we do business with to always work for the best interest of our state."

Motley Rice represents other red states, such as Kentucky and West Virginia, in litigation related to the opioid epidemic. A spokeswoman for Kentucky attorney general Daniel Cameron (R.) said Motley Rice was subcontracted by its primary outside counsel, another liberal plaintiffs' firm called Morgan & Morgan that gave about $2.4 million to Democrats in 2020 alone.

"Opioid manufacturers and distributors pumped billions of pills into the commonwealth, creating a public health and public safety crisis," Cameron spokeswoman Elizabeth Kuhn told the Free Beacon. "This litigation has no place for politics, it's too important for the people of Kentucky.  Furthermore, Kentucky's procurement law is clear that it is illegal to award or not award contracts based on politics."

Other red states that have done business with Motley Rice on opioid-related matters include Alaska and South Carolina.

Motley Rice's long experience with opioid cases and multi-district litigation make it a natural candidate for any public client seeking a large damages award to offset the opioid epidemic's deadly toll. But Motley Rice isn't the only game in town, and the many alternatives on offer make the red state alliance with the firm especially curious.