Easy, Tiger. All Republicans did was follow the precedent of the Clinton trial. They also admitted the House evidence into the record. The vote on witnesses will arrive next week. Hysterical accusations of national betrayal won't win the Democrats any converts. When Trump counsel Pat Cipollone said Nadler should feel embarrassed after insulting 53 U.S. senators, Chief Justice Roberts intervened to "admonish the House managers and the president's counsel in equal terms to remember that they are addressing the world's greatest deliberative body." Roberts played it safe. He rebuked both sides. Nadler, though, was the reason he intervened.

Roberts had company. Nadler's comments also bothered Lisa Murkowski, who said his accusation was "offensive." Susan Collins put out a similar statement. Murkowski went further, saying she was puzzled the House didn't go to court to force testimony from administration officials. "The House made the decision that they didn't want to slow things down by having to go through the courts," she said. "And yet now they're basically saying you guys gotta go through the courts. We didn't, but we need you to." Why, it's almost as if the Democrats are out for political gain rather than justice.

The cynicism behind the Democratic strategy has brought Republicans together. There is little sign that the unity of the opening votes has dissipated. That can change, of course. Democrats hope to convince four Republicans to extend the trial by calling witnesses and requesting documents from the Trump administration. But they are having trouble. You can tell because Chuck Schumer's press conferences are louder than usual. He's not using them to convince the undecided (if such people exist). He's taking the opportunity to draw a partisan contrast that he hopes will hurt Republicans in the fall.

I'm dubious. Impeachment is likely to be long forgotten by November. No one seems to be paying attention to it now. Not even the senators who will decide the case are plugged in. At least four of them would rather be in Iowa. A trial that ends by February 1 would give Bernie Sanders, Elizabeth Warren, Amy Klobuchar, and Michael Bennet 48 hours to make the final argument to caucus-goers. Sanders and Warren need that time if they want to spoil Joe Biden's chances.

The calendar has shaped impeachment from the beginning. It's why the House rushed to vote before the Christmas recess. And it's why Nancy Pelosi seized on the whistleblower complaint. The Ukraine business was the perfect way to unite the growing number of Democrats for impeachment with freshmen from swing districts whose constituents are more interested in protecting coverage of pre-existing conditions.

Pelosi wants to remain speaker of the House. She knows that a failure to impeach President Trump would invite a challenge from the left. Especially if Trump wins a second term. Jerry Nadler and fellow impeachment manager Hakeem Jeffries are both from New York, where the Democratic establishment lives in fear of Alexandria Ocasio-Cortez and her woke brigades. Impeachment is a base play, a way to protect your flank from accusations of anti-Resistance activity. It has also boosted the reputation of Adam Schiff in Democratic circles. He seems right at home in the Senate.

A Republican senator told me before the trial began that the conduct of the House managers would play a major role in forming senators' judgments. Nadler's eruption proved the point. The contemptuous attitude of Democrats toward Republicans, and the pass-the-buck mentality that drove the House to impeach Trump before the evidence was in and inter-branch disputes settled by the courts, give GOP senators every reason to vote on the charges sooner rather than later. No one doubts that it's a vote Trump will win. 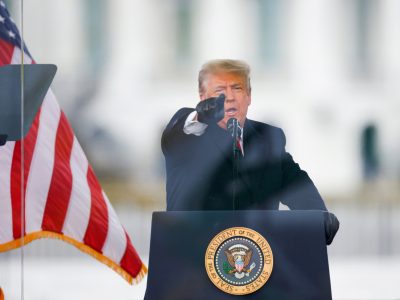