More than 96 percent of itemized contributions to Democrat Amy McGrath's campaign came from outside Kentucky, including a contribution from NBA coach and China apologist Steve Kerr.

Kerr, who contributed $250, recently deflected questions on China's human rights abuses, pointing to "people owning AR-15s and mowing each other down in a mall" in the United States as a comparable problem. The McGrath campaign did not return requests for comment on Kerr's statement and contribution.

Just $140,000 of McGrath's $3.6 million in itemized contributions came from the failed congressional candidate's home state, while nearly $2 million came from the liberal strongholds of California, New York, and Massachusetts. McGrath was defeated by Kentucky Republican incumbent Andy Barr in her 2018 House campaign and is now running to oust Senate Majority Leader Mitch McConnell (R., Ky.). McGrath failed to mention the word "Kentucky" in her Senate campaign's launch video and has since portrayed her campaign as a "grassroots movement" despite the dominance of out-of-state cash.

McGrath raised nearly $1 million from the state of California alone, including about $100,000 in contributions from prominent Hollywood liberals. Jeffrey Katzenberg, a prominent movie producer and Barack Obama's top bundler during the 2012 presidential campaign, and his wife both made $2,800 donations to McGrath's campaign. Katzenberg, who co-hosted a fundraiser for Democratic presidential candidate Joe Biden last week, has been a staunch critic of President Donald Trump. 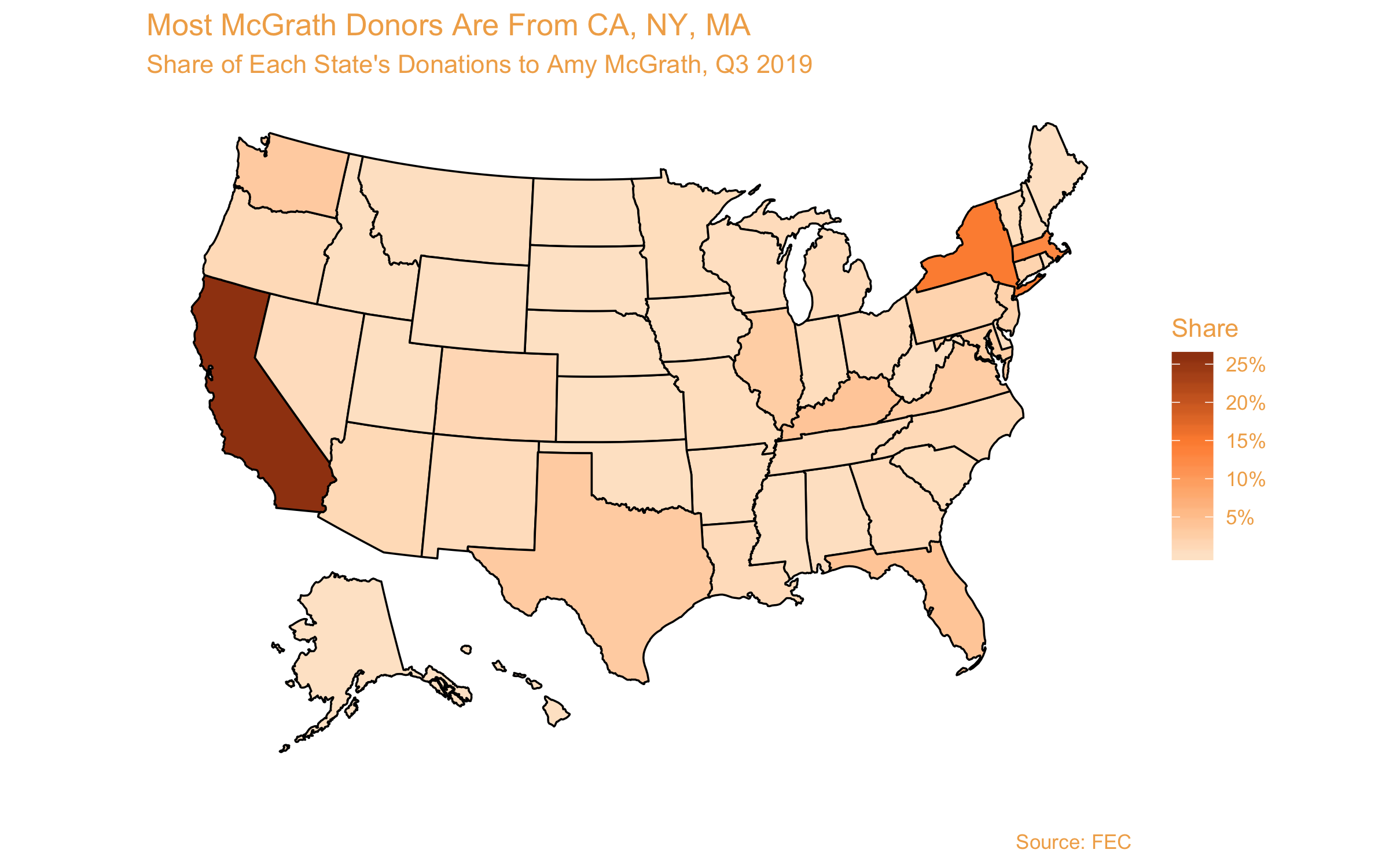 Kerr, also an outspoken critic of Trump, cited a "human respect issue" in 2017 when he said he would not visit the White House after his Golden State Warriors won the NBA title. But when asked about China’s history of human rights violations this October, Kerr pivoted to a harangue about gun violence in America.

Trump called out Kerr’s dodge in a press conference, comparing him to a "little boy."

"He didn't know how to answer the question, and yet he'll talk about the United States very badly," Trump said, adding a criticism of San Antonio Spurs head coach Gregg Popovich, "I watch the way that Kerr, Popovich, and some of the others were pandering to China and yet to our own country, they don't—it's like they don't respect it."

McConnell campaign manager Kevin Golden criticized Hollywood's influence on the McGrath campaign. He said the donations demonstrate that she is out of touch with Kentucky residents.

"Hollywood liberals are pumping cash into McGrath's campaign because they think she'll provide California a third vote in the Senate," Golden said. "They hate that Mitch McConnell guarantees Kentucky values a spot at the front of the line."

McGrath raised a combined $986,000 from the states of New York and Massachusetts. Liberal megadonor George Soros contributed $2,800, as did his son Alexander. McGrath's itemized contributions also show she accepted more campaign cash from Florida than Kentucky. McConnell's campaign has long predicted McGrath's out-of-state draw, writing that "left-wing billionaires, progressive activists, and Hollywood liberals will fund our opponent" on the campaign's website after McGrath announced her campaign.

McGrath's third quarter fundraising relies even more on out-of-state support than her failed 2018 run. The Marine veteran raised $8.5 million during the midterms, with 76 percent coming from outside of Kentucky. Golden said the donations reflect McGrath's flawed campaign strategy.

"They can hand her campaign millions of dollars, but they can't vote in Kentucky," he said.