Jon Ossoff Dodges On Support For Nancy Pelosi, Has Taken Money From Her

Georgia Democrat Jon Ossoff refused to say whether he would vote for Rep. Nancy Pelosi (D., Calif.) to be Speaker of the House if Democrats regained the majority even though the current minority leader has been a outspoken supporter of Ossoff and even held a fundraiser for him.

CNN anchor Ana Cabrera's question regarding Ossoff's support for Pelosi came after he refused to place himself on either side of the ideological divide between establishment Democrats and Bernie Sanders, who this week questioned whether Ossoff was a true "progressive."

"So tell me this, would you vote for Nancy Pelosi as leader or Speaker if the Democrats were to take the majority?" Cabrera asked after Ossoff's initial dodge.

Ossoff said that he hasn't given that question an "ounce of thought," because "there is a lot of time between now and then."

"I'm focused on winning an election here in Georgia’s sixth district not a potential leadership contest in the U.S. House of Representatives that’s at least a year and a half away," Ossoff said. "There’s plenty of time for Democrats to work out what’s going to happen at the national level."

Ossoff failed to mention that his campaign, which already raised over $8 million for the special election, has been the recipient of Pelosi's help on the fundraising support.

Pelosi headlined a Washington, D.C., fundraiser for Ossoff in March, and has been sending out fundraising emails on behalf of his campaign. 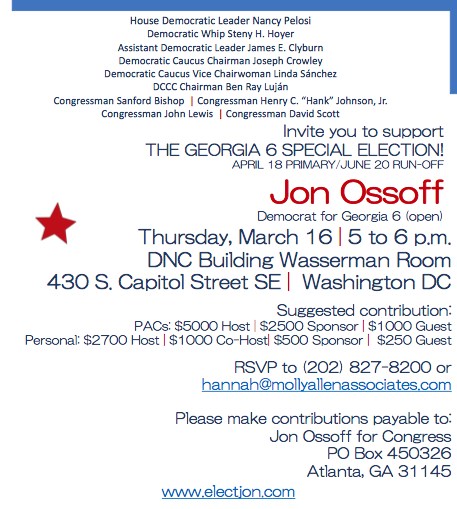 Republican group's have predicted that Ossoff would be a "rubber-stamp" for Pelosi if elected.