A West Virginia woman mounting a primary challenge of Sen. Joe Manchin (D., W.Va.) was pictured over the weekend with Jane Sanders while attending a national gathering of activists that supported Sen. Bernie Sanders for president in 2016.

Paula Jean Swearengin, who is running against Manchin by highlighting his lack of progressive credentials, attended the People's Summit over the weekend, where Sen. Sanders blasted the Democratic Party as "an absolute failure" that needs "fundamental change."

Her supporters posted a picture of her with Jane Sanders, who also spoke at the summit and just last week launched a new progressive think tank aimed at injecting progressive policies into the Democratic Party's mainstream. 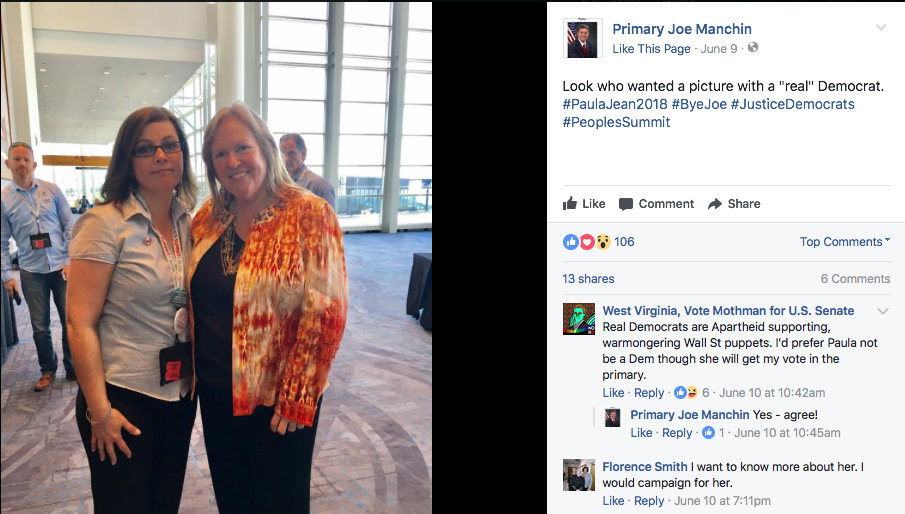 "Look who wanted a picture with a ‘real' Democrat," they wrote referencing Jane Sanders.

Swearengin was also pictured with Nina Turner, who was one of Sanders top surrogates during his presidential campaign and has been named one of the founding fellows of the new Sanders Institute.

Manchin being challenged by the Sanders wing of the party should come as no surprise to the senator. Pushed on his policies during a conference call with West Virginia voters earlier this year, Manchin called for Sanders supporters to try and beat him through the ballot box.

"What you ought to do is vote me out," Manchin said on the call. "Vote me out! I’m not changing. Find somebody else who can beat me and vote me out."

"It’s an invitation, you ought to. I can tell that, because we’re on different pages. Are you a Bernie Sanders guy?" Manchin said.

Manchin went on to tell listeners that "Bernie Sanders is not even a Democrat."

Sanders said during his People's Summit speech this weekend that the party "must understand what side it is on."

"The Democratic Party must understand what side it is on," Sanders said. "And that cannot be the side of Wall Street, or the fossil fuel industry, or the drug companies."

Manchin has positioned himself with the state's coal industry. He has also come under fire from Swearengin for his ties to pharmaceutical giant Mylan, which has given him hundreds of thousands of dollars worth of contributions over the years and is run by Manchin's daughter.

The Sanders Institute did not return a request for comment.