How To Get An Ambassador Position From Hillary Clinton

Hillary Clinton was ordered by the White House to give somebody an ambassadorial appointment in Africa, according to a message sent on her private email in 2010.

"He's coming in to see me today about a potential ambassadorial appointment in Africa," Clinton wrote to top aide Cheryl Mills. "The WH (and [Richard] Holbrooke) have told him that we will take care of him. What are our options for embassies next year?"

The identity of the man that was to be taken care of by the State Department is redacted from the emails, but apparently it was slim pickings when it came to ambassadorships in Africa. 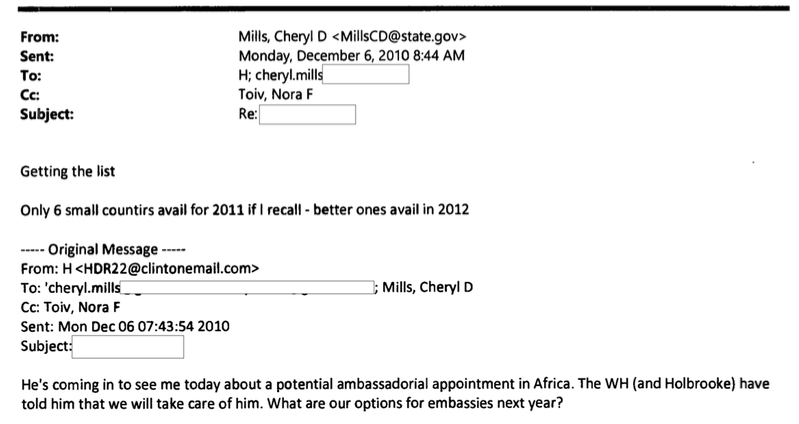 The Obama administration has been heavily criticized for not taking into consideration competence or diplomatic experience when it comes to ambassador appointments.

It was revealed during the confirmation hearing for the administration's pick for Argentina, donor Noah Bryson Mamet, that Mamet had never been to the country and didn't speak Spanish.

Colleen Bell, also a major political donor, was the administration's choice to be ambassador to Hungary. The producer for soap opera The Bold and The Beautiful failed to name a single strategic interest for the United States in Hungary.

Although it is unclear who was being given the ambassadorial position in Africa, it is highly unlikely that he had expertise in all six of the small countries that were available.