Letter: Dems are 'continuing to ignore instances of union corruption'

House Democrats who accepted hundreds of thousands of dollars from the United Auto Workers are now ignoring Republican calls to investigate the union in the midst of a federal probe.

Reps. Virginia Foxx (R., N.C.) and Tim Walberg (R., Mich.), top Republicans on the House Committee on Education and Labor, sent a letter nearly two months ago to Chairman Bobby Scott (D., Va.) and Health, Employment, Labor, and Pensions Subcommittee chairwoman Frederica Wilson (D., Fla.) urging a hearing to examine the ongoing UAW corruption scandal. The Democrats did not respond, despite numerous guilty pleas from union officials charged with corruption. Scott has received $66,000 in UAW campaign contributions since 1992, while Wilson took in $40,000 since 2012, according to the Center for Responsive Politics. In total, Democrats on the committee have accepted more than $300,000 in UAW money over the course of their careers.

Foxx and Walberg on Thursday reiterated their request to examine the UAW probe, writing that union leaders have committed an "outrageous breach of workers' trust." A federal probe into allegations of UAW corruption has already led to 13 people being charged—10 have admitted guilt in connection to the scandal. Foxx criticized committee Democrats for disregarding the allegations, saying that "American workers deserve better."

"Committee Democrats seem intent on completely ignoring this growing scandal in order to shield UAW union bosses from transparency and accountability, while at the same time pushing H.R. 2474, the PRO Act, which further worsens union coercion and makes union bosses even less accountable to the workers they claim to represent," Foxx told the Washington Free Beacon.

UAW did not respond to request for comment. The union has said it is cooperating with the investigation.

While Scott and Wilson have continued to ignore union corruption, committee Democrats recently passed the Protecting the Right to Organize Act of 2019, a union wishlist bill that would restrict secret ballot elections and allow unions to force objecting employees to pay for representation. Democrats failed to pass a similar proposal in 2009 despite controlling the House, Senate, and White House.

The federal investigation into fraud and misuse of funds at UAW began more than two years ago. A September affidavit filed in federal court accused UAW officials of extensive corruption and mass misuse of funds, including $400,000 to rent and clean private villas, $120,000 on golf outings, and $50,000 on parties with "ultra-premium" liquor and cigars, a person to roll cigars, and provocatively dressed women to light the cigars for UAW officials.

The probe has ensnared top officials.

UAW Region 5 director Vance Pearson was charged with orchestrating a conspiracy to steal more than $1 million in union dues. Also charged is former General Motors board member and retired UAW vice president Joseph Ashton, who is accused of fraud and money laundering. Seven high-ranking UAW officials are allegedly implicated in the probe, including UAW president Gary Jones, who took a paid leave of absence in early November.

In their most recent letter to committee Democrats, Foxx and Walberg emphasized the bipartisan nature of addressing union corruption.

"Sixty years ago, Members of Congress from both parties, including then-Senator John F. Kennedy, came together to formally investigate widespread corruption in organized labor," the Republicans wrote. "Rather than continuing to ignore instances of union corruption, we urge you to follow in the footsteps of John F. Kennedy and your Democrat predecessors, and hold a public hearing by December 12, 2019 to investigate formally the outrageous breach of workers' trust by leaders of the UAW."

Top Democratic presidential candidates have stood by the union despite the admissions of corruption from top union officials, as well as the continued allegations against others. Former vice president Joe Biden, Sen. Elizabeth Warren (D., Mass.), and Sen. Bernie Sanders (I., Vt.) were quick to back the union after it launched a strike against General Motors in September. Those three Democrats have received more than $100,000 in political donations from the union over the course of their careers, according to the Center for Responsive Politics. 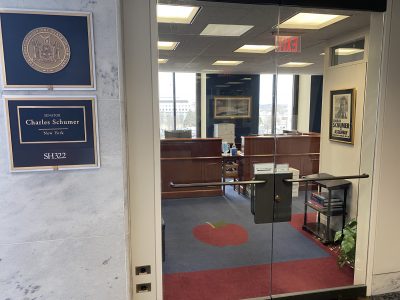