Feehan had tweeted repeatedly his support of Kaepernick when the quarterback and then other players refused to stand during the playing of the national anthem before games.

He should sit as long as he feels compelled. It is the precise use of freedom that I fought for on foreign soil. #veteransforKaepernick

"He should sit as long as he feels compelled," Feehan tweeted. "It is the precise use of freedom that I fought for on foreign soil. #veteransforKaepernick."

In addition to his use of the "#veteransforKaepernick" in his own tweet, Feehan retweeted two other stories about the hashtag.

Hashtag activism has its limits, but the #VeteransForKaepernick commentary is worth paying attention to. https://t.co/JnvQKF3Y4D

They are ready to die for our country – and the truths we hold to be self-evident. #VeteransForKaepernick https://t.co/cMABsInRit

Kaepernick hasn't played in the NFL since he opted out of his contract with San Francisco 49ers, entering free agency and going unsigned ever since. On Wednesday, the NFL announced a new policy where players must stand for the national anthem or stay in the locker room while it plays. 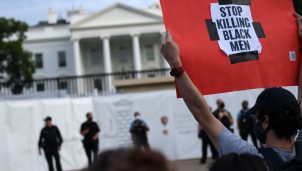 ‘Cops’ Canceled in Wake of Protests Against Police