During a press conference on Friday, Sen. Dick Durbin (D., Ill.) recalled how he told President Donald Trump that the term "chain migration" was offensive.

Durbin confirmed an accusation that the president called African countries and Haiti "s—holes" during a Thursday meeting with a bipartisan group of lawmakers, calling the comments "offensive."

But Durbin also says he took offense to something else the president said: "When we came to the issue of, quote, ‘chain migration,' I said to the president, ‘Do you realize how painful that term is to so many people?'"

"African-Americans believe that they migrated to America in chains, and when you speak about chain migration, it hurts them personally,'" he recalled. "He [Trump] said, ‘oh that’s a good line.'"

Despite labeling it an "offensive" term, Durbin's own Senate website featured an article from 2010 that used the term "chain migration" when defending the DREAM Act. Durbin also used the term in a 2007 press release when arguing the proposed DREAM Act would not give protected "Dreamers" access to legal status for their parents.

"The DREAM Act would NOT lead to ‘chain migration,'" it argued. "DREAM Act beneficiaries would have very limited ability to sponsor family members." 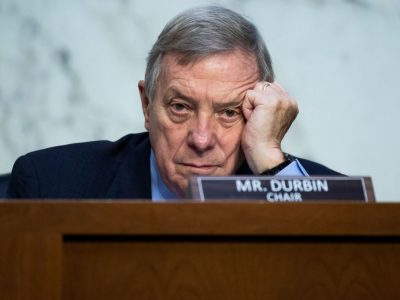