A Democratic Federal Elections Commission official may have violated federal ethics laws in her quest to have President Donald Trump provide proof that voter fraud occurred in New Hampshire during the 2016 elections, experts say.

FEC Commissioner Ellen Weintraub, who has for days called on Trump to prove his claim that he and former Republican Sen. Kelly Ayotte lost in New Hampshire due to voter fraud, released an official statement Feb. 10 asking Trump to substantiate the scheme.

"According to widespread news reports circulating today, President Trump has alleged an astonishing voter-fraud scheme that he claims denied him and former Sen. Kelly Ayotte victory in the state of New Hampshire in the 2016 elections," the statement reads.

"The scheme the President of the United States alleges would constitute thousands of felony criminal offenses under New Hampshire law."

"As a Commissioner on the Federal Election Commission, I am acutely aware that our democracy rests on the faith of the American people in the integrity of their elections."

The letter demanded Trump prove his claims to the public and authorities.

"I therefore call upon President Trump to immediately share his evidence with the public and with the appropriate law-enforcement authorities so that his allegations may be investigated promptly and thoroughly."

However, the FEC does not have jurisdiction over voter fraud issues—a fact that Weintraub acknowledged in October 2016.

"This has GOT to be some kind of joke, right? What is the FEC doing abt [sic] recent reports of voter fraud?" someone asked Weintraub over Twitter.

"That's outside of the FEC's jurisdiction," Weintraub responded. "We do campaign finance *only*. The elections themselves are handled by the states."

@High_n_Right That’s outside the @FEC’s jurisdiction. We do campaign finance *only*. The elections themselves are handled by the states.

Matthew Whitaker, executive director of the watchdog group Foundation for Accountability and Civic Trust, told the Washington Free Beacon that Weintraub's actions could constitute an ethics and legal violation.

"If she is using her office for personal political purposes, then it would be a misuse of taxpayer funded resource and could be a political issue as well," Whitaker said. "Also, the FEC does have significant cases before it that it should be focusing on, for instance our complaints on the hybrid ads and the candidates conspiracy to coordinate with the super PACs."

Hans von Spakovsky, a senior legal fellow at the Heritage Foundation, said that investigating voter fraud is "certainly" outside of the FEC's jurisdiction.

"The commissioners on the FEC are subject to a Standard of Conduct that the FEC adopted that is codified at 11 CFR Part 7. Investigating or regulating the voter fraud issue is certainly outside the jurisdiction of the FEC," Spakovsky said. "Part 7.13 of the Standard of Conduct states that commissioners are not allowed to directly or indirectly use Commission property ‘for other than officially approved activities.'"

"Using FEC letterhead and her authority as a commissioner to issue comments on this issue could be considered a violation of this provision since I doubt this is an ‘officially approved' activity," Spakovsky continued. "She certainly is entitled to make such comments on her own time and in her personal capacity, but not as a commissioner on the FEC according to this regulation. Anytime she appears on television, she is obligated to say she is appearing in her personal capacity and not as an official representative or member of the FEC.  If she is not doing that, then that is a potential violation."

Weintraub has appeared on national television in her official capacity as an FEC commissioner to speak on the issue. She also has sought help in her fight against Trump by tweeting at Hollywood celebrities.

"As a commissioner on the Federal Election Commission, I fight every day to build the faith of the American people in our elections," Weintraub told the Free Beacon in an email. "It's absolutely my right to raise public questions about another public official's statements about the integrity of our elections." 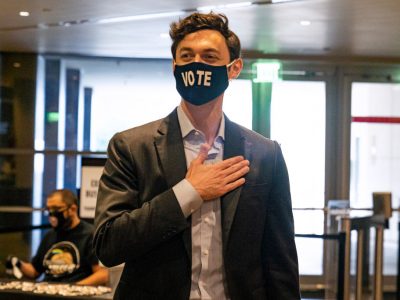 Californians Donate Twice as Much as Georgians to Ossoff