The director of national candidate services at the Democratic Congressional Campaign Committee on Tuesday falsely accused Texas Gov. Greg Abbott (R.) of being one of the public figures embroiled in a massive scam involving parents committing fraud to get their children admitted into elite universities.

In a now-deleted tweet, Tayhlor Coleman wrote, "Maybe if Gov. @GregAbbott_TX spent less time dog whistling about brown people voting he could've helped his kid prepare for the SATs instead of BRIBING their way into college. What an embarrassment." 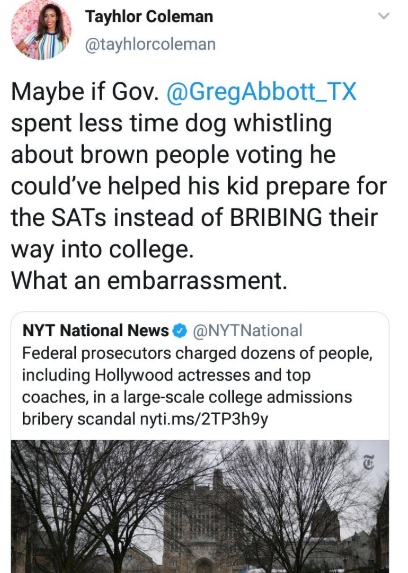 Despite Coleman's tweet, Abbott is nowhere to be found on the extensive list of those accused in the scheme. The list includes actresses Felicity Huffman and Lori Laughlin, as well as a number of wealthy CEOs and business executives from around the United States.

A Gregory Abbott was charged as part of the case, but not the governor of Texas. The accused, 68, of New York, is the founder and chairman of International Dispensing Corp., a food and beverage packaging company.

Fifty people were charged as part of a $25 million cheating scheme to help students get into top colleges. In some cases, those who were charged impersonated "the actual students, and in others by providing students with answers during the exams or by correcting their answers after they had completed the exams," according to the criminal complaint.

Investigators said that in other cases, students were told to pose in pictures in which they appeared to be playing on sports teams that did not exist. Scammers also sometimes photoshopped students' faces onto stock photos to create false athletic profiles. In one instance, a mother fabricated her child's involvement with a school's crew team, even though her child did not row.

The complaint added that many of the students were not aware of their parents' cheating. Charges include conspiracy to commit mail fraud and wire fraud. 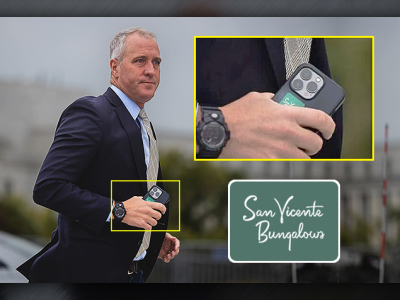