Cutter: Benghazi Is Only an Issue ‘Because of Romney and Ryan’

Obama deputy campaign manager Stephanie Cutter said Thursday that the "entire reason" the terrorist attack at the U.S. Consulate in Benghazi that killed four Americans has "become the political topic it is" is because Mitt Romney and Paul Ryan talk about the attack.

STEPHANIE CUTTER: In terms of the politicization of this — you know, we are here at a debate, and I hope we get to talk about the debate — but the entire reason this has become the political topic it is, is because of Mitt Romney and Paul Ryan. It's a big part of their stump speech. And it's reckless and irresponsible what they're doing.

BROOKE BALDWIN: But, Stephanie, this is national security. As we witnessed this revolution last year, we covered it–

CUTTER: It is absolutely national security–

BALDWIN: –it is absolutely pertinent. People in the American public absolutely have a right to get answers.

Cutter's remarks drew immediate criticism from across the political spectrum. But the Obama spox quickly doubled down on Twitter, replying to a Buzzfeed researcher, "Romney has politicized Libya w/no plans of his own. POTUS' priorities are getting facts & bringing terrorists to justice." 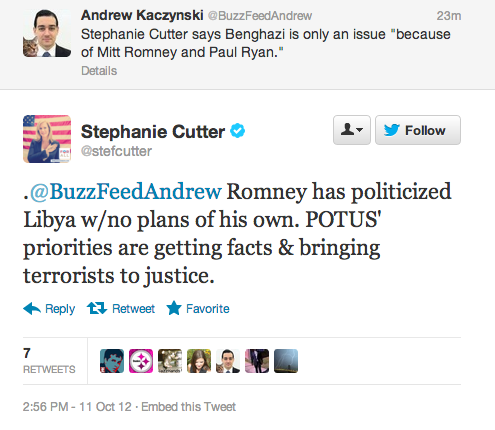 In fact, the Obama administration has face serious criticism for its response to the events in Libya that resulted in the murder of U.S. Ambassador Christopher Stevens. President Obama notably accused Romney of "shooting first and aiming later" in his response to the terrorist attack in Benghazi. However, yesterday, ABC News White House correspondent Jake Tapper challenged  White House press secretary Jay Carney, asking, "Given the fact that so much was made out of the video that apparently had absolutely nothing to do with the attack in Benghazi, that there wasn’t even a protest outside the Benghazi post, didn’t President Obama shoot first and aim later?"

"President Obama’s campaign today said that Libya is only an issue because of Mitt Romney and Paul Ryan. They’re wrong. The reason it is an issue is because, for the first time since 1979, an American ambassador was assassinated and President Obama’s foreign policy strategy of ‘leading from behind’ is failing. This administration has continually misled the American public about what happened in Benghazi and, rather than be truthful about the sequence of events, has instead skirted responsibility and dodged questions. The American people deserve straight answers about this tragic event and a president who can provide leadership, not excuses."