Sen. Tom Cotton (R., Ark.) got teary-eyed Tuesday while delivering a speech on the floor of the Senate memorializing everyday heroes during Hurricane Harvey.

Cotton took the floor to thank men and women who had helped out during Harvey, saying that their examples had been especially valuable in the trying time the country currently faces.

"I also want to express our thanks on behalf of a grateful nation. All of you reminded us of the American spirit at a time when we needed it pretty badly," he said.

Cotton reviewed some of the challenges that had faced America throughout the month of August, including violence in Charlottesville, Va. and at University of California-Berkley.

"But none of these contemptible people represent America. Certainly not what is best in America," Cotton said of violent protesters.

He called for deemphasizing the voices of anarchists and neo-nazis, who one would think "number in the tens of millions while watching TV or surfing the web." Rather, he turned to the example set by men and women in the wake of Hurricane Harvey, who revealed "an American spirit as strong, as brave, and as loving as ever."

"What was striking was how ordinary citizens answered the call to duty," he said.

He related stories from the flooding, like that of local mattress salesman Mattress Mac, who turned two furniture stores into shelters and helped 800-some people, sending his delivery trucks to pick up Houstonians who couldn't get to his store.

Cotton also repeated the story behind a much-shared photo of a woman being rescued from her home on a jet ski.

"After weeks of our living room being filled with the sounds and imagery of hatred, we are suddenly overcome with stories of bravery and sacrifice," Cotton said.

In telling these stories, Cotton grew audibly choked up, especially when telling the story of a group of neighbors who rescued a pregnant woman who was in labor.

"But perhaps the most telling image of all was the human chain. When Andrea Smith went into labor in her flooded apartment, her neighbors formed a human chain to help her reach a dump truck that had come to take her to the hospital," he said, emotion clear in his voice.

"There was no pride of place, no rank, no distinction. Just humble selfless Americans joining hands to help a neighbor in a time of need," he said.

"You could say that human chain was a symbol, because when you step back and soak it all in, you realize this is America. This is who we are as a nation," Cotton said. "Not those ideological zealots. Not racists and communists. Their blinded eyes cannot see the dignity and love in that unbroken human chain." 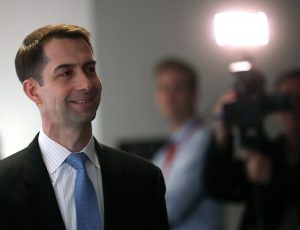 The Mainstream Media Spins a Pandemic 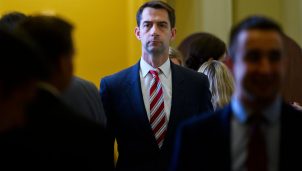 Tom Cotton Says China Is Due for a ‘Reckoning’