Sen. Claire McCaskill (D., Mo.) said her campaign was "hitting the road" in an RV to tour the state, but public flight information indicates that travel also occurred on her million-dollar private plane.

The RV, named BigBlue by the campaign, was unveiled late last month by McCaskill, who said she was "very excited to hit the road" in it for an upcoming "Veterans for Claire" tour. The campaign kept a live blog of its three-day RV trip from May 29 to May 31, posting updates of its whereabouts.

Very excited to hit the road next week in this. Names anyone for the RV? We are off on a "Veterans for Claire" tour on Tuesday morning. pic.twitter.com/XihjI71AjV

Unmentioned on the blog is the role McCaskill's private plane played on the trip. The aircraft is a single-engine turboprop valued on her financial disclosure forms at more than $1 million dollars.

McCaskill has taken steps to hide the use of her plane. In a 2017 email obtained by the Washington Free Beacon, the senator asked the Federal Aviation Administration to block radar tracking information on her plane from being publicly broadcast on the internet. The request blocks the ability to track her plane on websites such as FlightAware.com.

Websites such as ADS-B Exchange, however, use a different type of data transmission to make tracking information available to the public. Community members of the crowd-sourced website upload the ADS-B information broadcast by the plane and upload it straight into the site's free database, which can in turn be used to track planes such as McCaskill's.

The GPS-based data transmitted by McCaskill's plane for the days of her RV tour across Missouri indicates that it was used to travel between campaign stops.

On Tuesday, May 29, for example, McCaskill's tour took her from Waynesville in central Missouri, west to Springfield, and then further west to nearby Joplin, according to the campaign's blog.

The plane, according to the tracking data for the day, took the same route as the campaign RV.

It left St. Louis where it is based and headed toward Springfield just after 3:00 p.m. (ADS-B Exchange posts times in UTC, or Coordinated Universal Time, which is five hours ahead of Missouri's Central Time Zone) and arrived 30 minutes later, right around when McCaskill was done meeting with local student journalists on the RV, according to her blog and social media posts. 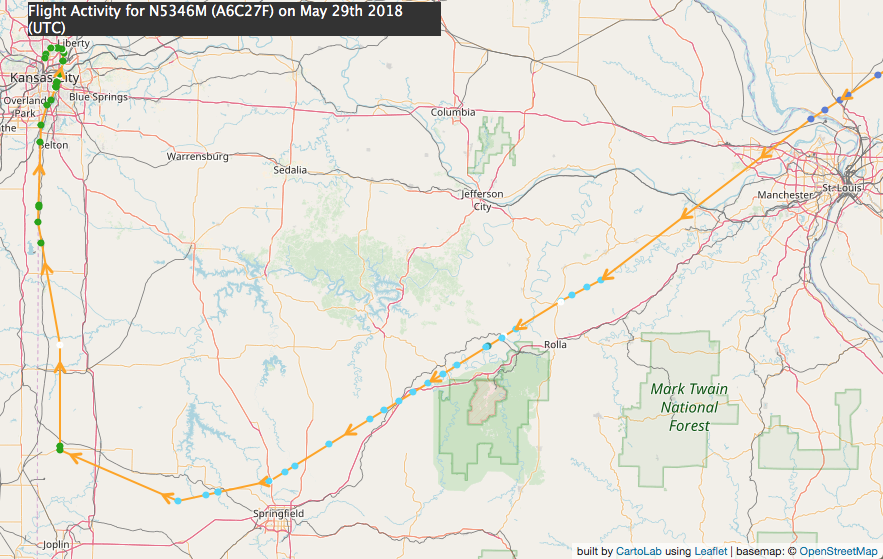 The plane then traveled west toward Joplin, and then at 5:22 p.m., seven minutes after McCaskill posted that she was done with her event in Joplin, the plane took off towards Kansas City, the site of McCaskill's first event the next day. The flight landed at 5:51 p.m., about two hours earlier than the RV would have arrived.

On Wednesday, May 30, according to the tracking data, the plane again took the same route as the McCaskill campaign's RV tour, which went north from Kansas City to St. Joseph, and then southeast to Columbia. 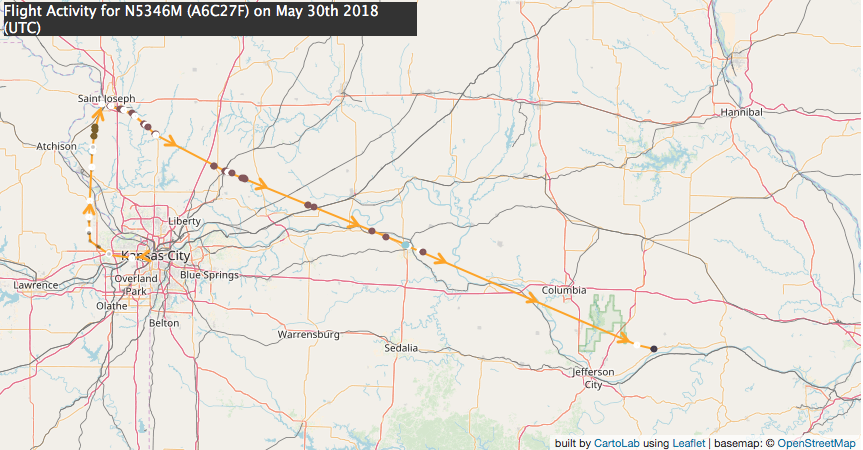 The plane does not appear to have been used on May 31, the final day of the RV tour, when the campaign went from Hannibal to Arnold, just outside of McCaskill's hometown of St. Louis.

The Washington Free Beacon was unable to determine whether McCaskill traveled on the plane, and her campaign didn't respond to inquiries.

After publication of this report, however, McCaskill confirmed to Politico that she used her private plane while on the RV tour.

"I added some stops with the use of the plane," McCaskill said, "but I was on the RV so much that the broken door drove me crazy."

McCaskill said she was not trying to hide use of her plane.

"Anybody could have followed me," McCaskill said. "They could have seen when I got off the RV and when I went and got on the airplane."

The ADS-B transmissions contain the plane's exact position, velocity, and altitude. The site writes off any concerns about broadcasting information because ADS-B data is broadcast publicly and not subject to blocking restrictions.

"By definition, ADS-B information is broadcast unencrypted over the air," it says on its homepage. "Any member of the public with $100 and the ability to order parts from Amazon can receive this data."

James Sanford, a pilot and software expert who runs day to day operation of the website, explained that it doesn't get any information from the government and therefore isn't restricted by its block list.

"Sites like Flight Aware that plugged into the government's FAA feed are required to block certain aircraft that request it," Sanford explained. "We don't subscribe to any of those government feeds, so we don't have to abide by any of that."

Sanford says it is illegal to remove or switch off the transponder giving off ADS-B data from the plane. He also said the community of feeders has grown large enough to confidently state it is picking up all ADS-B transmissions.

"It costs us $200 just to fill up the RV and with the number of places we plan on going—that adds up fast," the campaign wrote, without mentioning aircraft fuel costs. "Will you pitch in just $5 today to help fund our RV tour and power us to a victory in November?"

McCaskill has gotten in hot water for using taxpayer money to fund travel on her private plane in the past but has thus far this election cycle been paying its operating costs out of her own pocket. Campaign filings from 2017 showed she was spending about $7,000 per month to use the plane on the campaign trail.

UPDATE 4:07 p.m.: This piece has been updated to include McCaskill's comment to Politico.