Maine Democrat Sara Gideon is campaigning as a "champion for the environment" but is also relying on oil executives to help finance her Senate run.

Gideon, the speaker of the Maine House of Representatives, invited four millionaires from the oil industry to host her Jan. 10 fundraisers in Houston. These four Democratic megadonors already donated thousands of dollars to Gideon's campaign before the fundraiser. Gideon's state leadership PAC also collected thousands of dollars from fossil fuel companies, including from a firm that the PAC's treasurer lobbied for.

One of the donors, Michael Zilkha, is an oil billionaire who built his wealth when he sold his firm Zilkha Energy, which managed a massive natural gas reserve in the Gulf of Mexico. He and his wife have donated more than $400,000 to Democrats over the years, including $8,400 to Gideon's Senate campaign.

Zilkha and his wife Nina hosted the Gideon fundraiser alongside three Texas millionaires who enriched themselves by working for the fossil fuel industry. Former Houston mayor Bill White is a former Clinton official who made millions operating what he called the "largest foreign oil and gas operator in onshore Azerbaijan." Michael Gamson was an executive at Vitol, the "world's largest independent oil trader." Carrin Patman is a lawyer with a track record of defending oil companies against costly lawsuits.

The Democrat's campaign did not respond to a request for comment.

Gideon's ties to the energy industry has not stopped her from attacking Sen. Susan Collins (R., Maine.) for receiving donations from the "Texas fossil fuel industry." Gideon is not the only Democratic candidate who has taken contributions from sources that appear to conflict with progressive policies. Former vice president Joe Biden participated in a climate forum where he slammed fossil fuels only to attend a fundraiser hosted by an oil executive the following day. Presidential candidate Tom Steyer said he completely divested from fossil fuels, but a detailed look into his finances proved otherwise.

Gideon's fundraiser solicited big checks, with the minimum contribution set to $500 and "hosts" expected to donate $5,600. It will remain unclear how much money the event raised until Gideon's quarterly campaign disclosures are released, but these oil tycoons and their spouses have collectively donated over $3.5 million to political figures and causes, mostly Democrats.

Gideon started building ties with the fossil fuel industry during her time in the state house. Her leadership PAC, launched in May 2014, employed Jay Nutting, a lobbyist for Emera Energy, as its treasurer. Emera Energy would donate nearly $2,000 to Gideon's leadership PAC, according to filings with the Maine Ethics Commission. In total, the PAC has received $7,000 from oil and gas companies.

While Gideon touts environmentalist positions on the campaign trail, she has avoided supporting bills that undermine the fossil fuel industry in the state house. She abstained from voting for both the Green New Deal and a 2017 bill that prohibited banks from supporting the Dakota Access Pipeline. She also pushed a bill through the legislature that relaxed rules around oil storage sites, a major win for fossil fuel companies.

The Maine Democrat has raised $7.6 million for her Senate campaign. The impressive war chest, however, has drawn attention not only from her primary opponents but campaign finance watchdog groups. The state's ethics watchdog unanimously voted to fine Gideon's PAC after it was revealed that she used illegal means to reimburse donations.

Gideon is seen as the favorite to win the Democratic primary, which is slated to take place in June 2020. She faces an uphill climb in the general election. She trailed Collins by 14 points in a poll conducted last June. 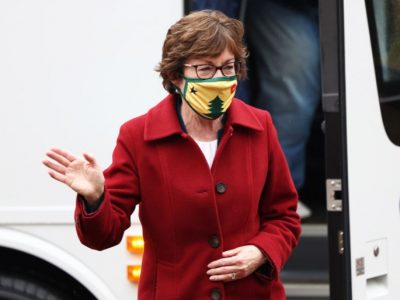