Candy Crowley: He Was Right

Moderator: Romney was 'right in the main' on Benghazi, but 'picked the wrong word'

After the debate, debate moderator Candy Crowley said Republican nominee Mitt Romney was "right in the main" but "picked the wrong word" on the Obama administration's immediate response to the terrorist attack in Benghazi, Libya, that left four Americans dead.

Crowley interrupted Romney during the debate, insisting that President Obama had in fact called the attack an "act of terror."

ROMNEY: I want to make sure we get that for the record because it took the president 14 days before he called the attack in Benghazi an act of terror.

OBAMA: Get the transcript.

OBAMA: Can you say that a little louder, Candy?

CROWLEY: He — he did call it an act of terror. It did as well take — it did as well take two weeks or so for the whole idea there being a riot out there about this tape to come out. You are correct about that.

In a statement given in the Rose Garden on Sept. 12, Obama emphasized an anti-Islam video, before saying that "no acts of terror would shake the resolve of this great nation."

The administration's narrative on the attack over the next two weeks was muddled.

On Sept. 16, U.S. Ambassador Susan Rice attributed the attack on the U.S. Consulate to violent protests stemming from a "heinous and offensive" video.

On Sept. 25, the president himself declined to call the attack an act of terrorism during an interview with "The View," saying that an investigation was still ongoing.

Update (12:22 a.m.): After the debate, "Romney was actually right on Libya" trended on Twitter in the United States: 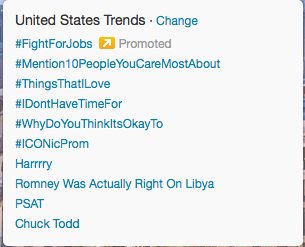