PHILADELPHIA—A gun rights advocacy group on Monday hosted a town hall-style meeting to teach black Philadelphians about their Second Amendment rights and how to legally exercise them while Democrats gathered at the Wells Fargo Center for the Democratic National Convention.

The event was run by Black Guns Matter, a gun rights advocacy group founded by Philadelphia local Maj Toure. Although the group is only a few months old, it has already outgrown its meeting space at the Philly Firearms Academy.

"We're a firearms safety, education, and training organization that helps people to not only maintain their Second Amendment rights but become more responsible firearms owners and good citizens," Toure said. "That's what we're about." 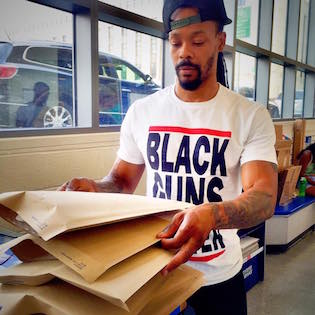 "We're informing people because there seems to be a push to keep people, especially in certain demographics, unaware and ignorant about their rights. It's not something they should have to fight for, it's something that they're born with. We're just an educational resource for anybody who wants to learn."

The event featured Minister Jazz, who spoke about de-escalation techniques, and Jose Morales, the National Rifle Association-certified instructor who owns the academy.

"About a year and a half ago Maj walked in my door," Morales said. "He had some questions on concealed carry and a casual conversation became a two and a half hour-long conversation on all sorts of things from the Second Amendment to firearm history to the history of people of color carrying guns. He's a kindred soul. He gets it. He doesn't look like me but we have a lot in common."

"When he approached me about three months ago and explained to me the goal of the Black Guns Matter movement, I jumped on board. He's all about spreading education. He's an educator. I'm an educator. We're working from parallel levels."

The two-hour event covered a number of different topics. Morales instructed the crowd on how to properly secure a firearm in their homes and how best to deal with a police stop while armed. Jazz discussed how to recognize and control dangerous situations to keep them from escalating into violence. Toure talked about the importance of being legally armed and best practices for interacting with law enforcement. 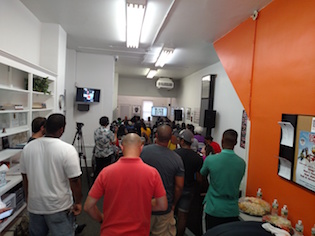 Members of the audience asked questions about the intricacies of Philadelphia’s gun laws and the racial biases of the city’s police force. One woman asked if she was allowed to use her son's gun in self defense if an intruder broke into her home. A man from New Jersey asked if he could get a Pennsylvania concealed carry permit so he could carry a gun when he's in the city. Another man asked if he could legally carry a gun at work.

A number of attendees complained that police treated them differently than white suburban gun owners. Toure agreed, but said he still encourages black citizens to arm themselves so they can defend themselves from crime. He added that if more people in the African-American community were legally armed it might change the perception among police and improve their relations with the community.

Morales said the event was not political and was open to anyone looking to learn. "This is so not political that we don't care what side of the gun platform you are: Pro-gun, anti-gun. I don't care," he said. "It's pro-education. I want people that want education to come on in and be involved in the program."

Toure started Black Guns Matter because he thought people needed to be better informed. "Just seeing the ignorance," he said. "Just seeing that when I'm with certain friends of mine that are in Utah and seeing their understanding of firearms and then when I come back to the hood and seeing the misinformation. Knowing that there's that gap there, I know that if there's a hole, then there's something we can do to fill that hole. And creating solutions—not just complaining about the problem—is partnering up with good people that know their craft and are willing to be open and share and do the work."

He said that African-Americans generally have a negative view of firearms, a stigma he wants to change that. "It's been taboo to talk about firearms in the black community especially," Toure said. "The general stigma is, if you have a firearm in the community you are either the bad guy or law enforcement. That's something that is inaccurate. There's law enforcement that are bad guys and there are guys from the hood that are great guys and they both may have firearms."

"So we're here to break that stereotype by showing people that to have a firearm, no different than the Founding Fathers said hundreds of years before me, that's part of being a good citizen," Toure said. "Not leaning on the police for everything. They have more things on their plate than they need to. Our own personal safety is up to us as citizens."

The group hopes to spread its message beyond Philadelphia.

The group is currently looking for a facility to house future events in Philadelphia. It is raising money for a cross-country tour of 13 American cities.