Ocasio-Cortez, a rising star on the left, took heat from both sides of the aisle after saying the "fascist" Trump administration was running "concentration camps" on the southern border to detain migrants.

Malinowski, who ousted a 10-year incumbent Republican in 2018 to win his seat in New Jersey, said nothing when asked if he agreed with Ocasio-Cortez's characterization.

"What did Tom Malinowski say when Alexandria Ocasio-Cortez compared protecting our southern border to Nazi concentration camps?" the narrator in the ad asked. "Absolutely nothing."

"It’s a disgrace that Tom Malinowski won’t stand up to the disrespectful rhetoric that’s now rampant on the left," said AAN spokesman Calvin Moore. "The longer Malinowski stays quiet, the more he makes clear he is willing to overlook inflammatory rhetoric rather than do what is right."

Malinowski formerly served in the Obama administration as assistant secretary of state for democracy, human rights, and labor.

Ocasio-Cortez and the left wing of the Democratic Party in Congress took a political defeat last week, when Speaker of the House Nancy Pelosi (D., Calif.) reluctantly green-lit a Senate-approved $4.6 billion emergency border bill. More Republicans (176) than Democrats (129) voted for it in the House.

"I do not believe we should be throwing more money to ICE," Ocasio-Cortez told CNN. "My district is 50 percent immigrant. I have an obligation and responsibility to protect them. I believe what we should ideally be doing is passing a pure humanitarian bill to get money straight to the kids."

Ocasio-Cortez has been fiercely defensive of her "concentration camp" remarks, retweeting supporters on social media and saying in an interview it was so there wouldn't be a repeat of history.

One Holocaust survivor told the New York Post Ocasio-Cortez should be out of Congress and deserved a nomination for the Nobel Prize for stupidity.

Bernie Says Dems Should ‘Tone Down’ Rhetoric Against Israel 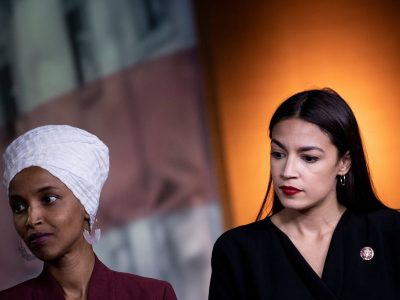