Oct. 29, 2012, marks another mournful milestone for Senate Majority Leader Harry Reid and his Democratic colleagues. Today is exactly three and a half years from the last time Senate Democrats passed a formal budget resolution, as required by law.

As Politico noted earlier this year, "Democratic leaders have defiantly refused to lay out their own vision for how to deal with federal debt and spending."

Reid has said offering a Democratic budget would be "foolish." And that is probably true from one perspective, as doing so would force vulnerable Democratic incumbents facing reelection to cast a series of politically difficult votes on spending and deficit issues.

Vice President Joe Biden, a former Democratic senator, has often said of Republicans on the campaign trail: "Don't tell me what you value, show me your budget, and I'll tell you what you value."

But Biden’s former colleagues have done no such thing. Since April 29, 2009, when Senate Democrats last approved a budget resolution, the federal government has added more than $5 trillion in new debt. 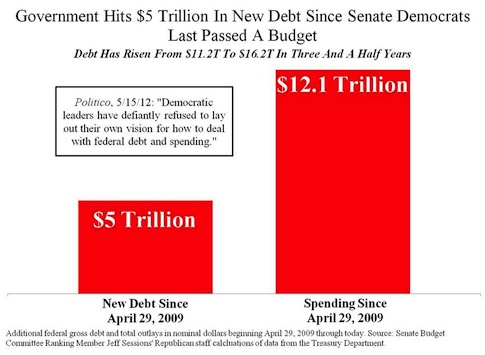 President Obama’s most recent budgets, on the other hand, were widely panned by independent analysts and did not receive a single Democratic vote in either chamber of Congress.

Budgets are typically considered to be a beneficial tool for maintaining the fiscal health of large countries.