'The system of government that we have in this nation is not systemically racist; in fact, it is not racist at all'

Mark Robinson, the first African American to hold his position, has been an outspoken critic of the new curriculum standards, which he says were created because of the board of education's political agenda rather than to educate students. The curriculum would require second graders to learn "how various indigenous, religious, gender, and racial groups advocate for freedom and equality," while fourth graders would learn how "revolution, reform, and resistance" shaped North Carolina.

"I don't think that these things that we have included have been for the benefit of the students," Robinson said during a school board meeting in late January. "There's no reason why we should be trying to teach second graders about the complex issues of race. Those children have enough on their plate learning how to read, and write, and do mathematics."

Robinson is working to build an opposition to the curriculum, which he characterizes as divisive and anti-American. In a petition—that by Wednesday afternoon had nearly 30,000 signatures—he argued that the courses are designed to "indoctrinate our students against our great country."

At one point in the draft process, the standards included teaching students as young as kindergarten about "systemic racism" and "gender identity." While the education board edited that the words "systemic" and "gender" out last month, opponents of the changes say the tone of the standards still suggests that the United States is inherently racist.

"I would still need to know how racism, minus ‘systemic,' how identity, minus ‘gender,' is contextualized in the objectives," said Dr. Olivia Oxendine, a member of the state's education board since 2013. "Just removing words doesn't change the intent of the objectives."

As long as the objective is teaching students that the United States is a racist nation, Robinson says he will not approve.

"The system of government that we have in this nation is not systemically racist; in fact, it is not racist at all," he said. "To say that this is a racist nation—that is not true. And when we write standards that point to that direction in any way, we are doing our students a disservice."

Under the proposed curriculum standards, high school students taking American history would learn to "explain how slavery, xenophobia, disenfranchisement, and intolerance have affected individual and group perspectives of themselves as Americans" and to "compare how some groups in American society have benefited from economic policies while other groups have been systemically denied the same benefits."

Terry Stoops, the director of the Center for Effective Education, said that the new standards fail to balance the study between individual and common identity. He argued those who oppose the standards don't fear addressing the dark sides of America's past but, rather, "object to making bigotry the beginning, middle, and end of the American story."

"Objection to the standards is not that they highlight disturbing parts of our history, but that they fail to balance between good and bad, evil and righteous," Stoops told the Washington Free Beacon. "America's history reflects both of those extremes. And the standards as they are written prefer to talk about one side of the American story and fail to highlight the common good, the need for national unity, and the idea that we can be a common nation and share common ideals while still being individual groups."

Robinson has faced backlash for opposing the new standards. A local news station on Tuesday published a political cartoon depicting Robinson and other Republican opponents of the curriculum changes as members of the Ku Klux Klan. 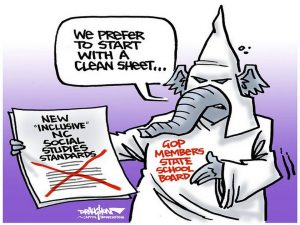 "On the second day of Black History Month, the first Black lieutenant governor of North Carolina has been portrayed as racist," Robinson said, criticizing the idea that anyone "would portray a black man, just because he’s in the GOP, as a Klansman."

Though Robinson has a seat on the board as lieutenant governor, he is likely fighting an uphill battle against the standards—a majority of voting members were appointed by North Carolina's Democratic governor Roy Cooper. The board of education will vote on implementing the new curriculum standards Thursday.

You may listen to Robinson's full remarks at the board of education meeting here.