The unarmed RQ-4 drones are among the Pentagon’s most high-profile military tools in the U.S. pivot to Asia, and will be used for intelligence-gathering in the region.

An Air Force spokeswoman said the two drones are being transferred for summer duty in Anderson Air Force Base in Guam, to Misawa Air Base in Japan and will begin flights this month. About 40 troops are deploying as part of the operations that will continue through October.

"The temporary rotation of the Global Hawk from Guam to Japan will support U.S. intelligence, surveillance, and reconnaissance priorities, operational plans, and contingency operations throughout the Pacific theater, and will ensure continued regional stability and security beneficial to all nations in the Asia-Pacific," said Air Force Capt. Heather Boytim, spokeswoman for the Hawaii-based Pacific Air Forces.

The drone deployment to Japan comes amid increasing tensions between China and Japan over the Senkaku islands in the East China Sea, and between China and several Southeast Asian nations over maritime disputes in the South China Sea.

Drone operations from Misawa will provide Japan’s military a chance to see the large unmanned aircraft up close. The Japan Self-Defense Forces plan to purchase three Global Hawks for its forces by 2015. They will be based at Misawa.

"The Global Hawk provided us with a wealth of data, including surveillance of crippled reactors at Tokyo Electric Power Co.’s Fukushima No. 1 nuclear power plant," a senior Self-Defense Force official told the Yomiuri Shimbun, which first reported the deployment. "The device will be effective in surveying the activities of North Korea and the Chinese military."

China’s military has said it plans to counter Global Hawk drone flights using electronic countermeasures, according to a recent article in a Chinese technical journal.

China opposes U.S. surveillance flights and there are concerns the Chinese might try to shoot down one of the aircraft by claiming the right to enforce its unilaterally imposed air defense identification zone over the East China Sea.

Methods contemplated for disrupting Global Hawk flights, according to the article, include electronic jamming of onboard spy sensors, disrupting communications and control links between the Global Hawk and its satellite relays, and using airborne warning and control aircraft to direct jet interceptors to the drones where they could be shot down with air-to-air missiles.

Chinese military writings also indicate Beijing is planning to use cyber attacks to take control of Global Hawks in flights.

"Regardless of whether it is a Global Hawk or an RQ-170 stealth [drone], it is afraid of seven things: electronics jamming; camouflage deception, being dazed by smoke screens; mid-air intercepts; airborne early warning; attack platforms and mid-air ambushes," the Chinese military report said. "If effective barrage jamming can be implemented by the opponent, then the operational effectiveness of the [drone] will be partially or totally lost."

Drones are key systems involved in China’s island and maritime disputes in the region for the past several years.

China operates drone bases at Yingkou and Dalian to cover the Yellow Sea, and at Lianyyungang for drone flights over the East China Sea.

China’s state oceanic agency announced in 2012 it would set up drone bases near disputed territories in the East China and South China Sea, including Scarborough Shoal, the Senkakus, the Paracels, and the Spratlys—all locations that are the focus of current regional tensions. 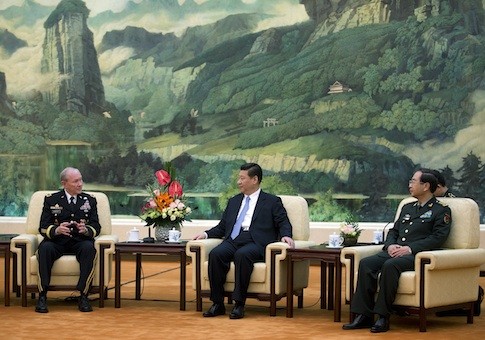 Dempsey expressed concerns about China’s "use of military assets to resolve disputes," which he said was "provocative and it does increase risk." He also told Fang about U.S. "alliance obligations," a reference to the U.S.-Japan defense treaty.

President Obama in Japan last month said the United States would back Japan militarily in its island dispute with China.

"I would like also to hope that the United States could hold a objective view on the issues of the South China Sea and the East China Sea because we believe the ones that are provoking those issues in the South China Sea is not China but certain countries that are attempting to gain their own interest because they believe China is now developing its economy and United States is adopting this Asia-Pacific rebalancing strategy," Fang said.

Fang defended China’s oil drilling rig near the disputed Paracel islands that Vietnam has protested. He also criticized Japan for claiming the Senkakus, which China calls the Diaoyu Islands, in the East China Sea, and criticized Philippines for its claims to the Spratly islands in the South China Sea.

Additionally, there are growing worries that North Korea is preparing a fourth underground nuclear test.

The Global Hawks will be providing intelligence coverage for both North Korean activities and Chinese naval and air maneuvers, a defense official said.

John Tkacik, a former State Department official, said that in addition to monitoring China and North Korea, "I suspect their immediate mission is surveillance of the upcoming Russo-Chinese Joint Sea-2014 exercises."

"The Russian Pacific Fleet is based in Vladivostok, just across the Sea of Japan from Misawa air base, and the Global Hawk program will enhance Misawa's coverage of Russian naval operations," Tkacik said.

Tkacik said the deployment of the long-range drones is likely the first step in familiarizing the Japanese with the aircraft and its operations.

"All in all, it's a sign that the U.S.-Japan alliance relationship is healthy," he said.

Rick Fisher, a China military affairs expert, said there are questions about whether the Global Hawk is as capable of the U-2 manned spy aircraft that is slated for retirement next year.

"It does not appear that the Global Hawk can yet carry the same array of sensors as the U-2," said Fisher, with the International Assessment and Strategy Center.

"Given that the Global Hawk is unmanned, it should be expected that China and North Korea will test U.S. and Japanese reactions to extreme interference with its flights, up to and including capture or shoot down operations," Fisher said.

U.S. officials suspect Chinese advisers may have been involved in Iran’s electronic downing of a U.S. RQ-170 spy drone over Iranian airspace in 2011 and may try a similar act against a Global Hawk flying near China.

China has developed a large UAV that appears similar in design to the Global Hawk. Fisher said the drone deployment to Japan may prompt China to speed up deployment of its long-range UAV.

The Northrop Grumman-produced Global Hawk is a programmed surveillance aircraft that flies a predetermined route. Its sensors included high-resolution synthetic aperture radar—that can provide limited views inside ground structures, as well as long-range cameras and electro-optical and infrared sensors.

The aircraft is capable of flying over 40,000 square miles of ground or sea areas per day.

Boytim said the summer Global Hawk operations are moved from Guam to avoid storms and severe weather. "This rotational deployment of the Global Hawk is temporary but necessary for U.S. forces to have another base from which the platform can be reliably operated during summer," she said.

On the U.S. pivot to Asia, Dempsey said U.S. interests in the shift to the region include freedom of navigation, access to free markets, stability, and working with partners old and new and providing military training.

"And we will respond to threats. And most recently and most notably, of course, is the threat posed from North Korea," Dempsey said. "In response to which we've deployed ballistic missile defense assets and other capabilities. So we'll go [to Asia] because we can and should. And we'll go because we have to."