USA Today fell for a popular parody Twitter account that pretends to represent the North Korean government, including one of its tweets in a Thursday story.

McCain recently called Kim a "crazy fat kid," leading Pyongyang to characterize the comment as "a provocation tantamount to declaration of war against the [Democratic People's Republic of Korea]."

USA Today fell for the parody tweet, initially embedding it in a story on McCain's comments. The publication later deleted the tweet from the body of the piece, noting in a correction that the message was from a "parody account." But a screenshot of the message remained in the embedded video until it was also removed. 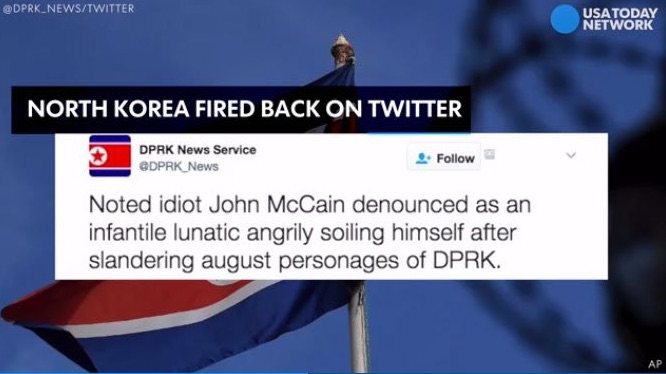 "Corrections & Clarifications: A previous version of this story included a tweet from a parody account. The quoted tweet has since been removed from the story," the article now reads.

The jokesters behind the account could not help but rub it in.

Drawers of childrens coloring book "USA Today" are denounced for drunken and swinish words concerning matters outside their understanding.

Thursday marks the second time in recent months USA Today has fallen for the parody account. In December, the paper cited a tweet from the account that read, "Donald Trump minister of nuclear weapons Richard Perry known as governor of Texas province, famed for its production of tacos and bumpkins."