WASHINGTON (Reuters) – The United States on Thursday said it had transferred two men from the U.S. detention center at Guantanamo Bay, Cuba, to the government of Algeria as part of its ongoing effort to close the controversial prison.

The Pentagon said Nabil Said Hadjarab and Mutia Sadiq Ahmad Sayyab were transferred from the prison on Wednesday and arrived in Algeria the same day, leaving 164 detainees at Guantanamo, including 84 others cleared for release years ago.

The two Algerians were detained in Afghanistan more than a decade ago and sent to Guantanamo prison – Hadjarab on January 20, 2002, and Sayyab on February 15, 2002.

The Obama administration first announced plans to repatriate the two inmates to Algeria last month, resuming the transfer of detainees for the first time in nearly a year.

The Pentagon said the decision to release the two men came after a comprehensive review by an interagency task force.

"As a result of that review, which examined a number of factors, including security issues, these men were approved for transfer by consensus of the six departments and agencies comprising the task force," the Pentagon said in a statement.

President Barack Obama has vowed to close the prison, which has held dozens of prisoners – most without charge – for more than a decade. But the process has dragged on for years.

Obama promised to close the facility during his 2008 presidential campaign, citing its damage to the U.S. reputation around the world, but he has been unable to do so in 4-1/2 years in office, in part because of resistance by Congress.

"Closing Guantanamo remains a priority," said Lieutenant Colonel Todd Breasseale, a Pentagon spokesman. "For this reason, we continue to seek a lifting of the current restrictions that significantly limit our ability to transfer detainees out of Guantanamo, even those who have already been designated for transfer."

Breasseale said Wednesday's transfers were possible because the two men were among the few detainees going to a country that was not specifically barred by legislative restrictions and Algeria was willing to provide the security and humane treatment assurances required by the United States.

He said Defense Secretary Chuck Hagel is continuing to evaluate other Guantanamo detainees for transfer, consistent with U.S. laws and national security interests.

The Guantanamo prison camp was established during the presidency of George W. Bush to house foreign terrorism suspects after the September 11, 2001, attack on the United States.

A hunger strike involving a majority of the inmates – and daily force-feeding of dozens – has fueled the calls to shut the detention center. Last month lawmakers blasted its cost, about $2.7 million per prisoner per year, compared with $70,000 per inmate at maximum-security federal prisons.

The last prisoner transferred out of Guantanamo was Omar Khadr, the youngest inmate and last Westerner held at the base. He was sent in September to finish his sentence in his native Canada. 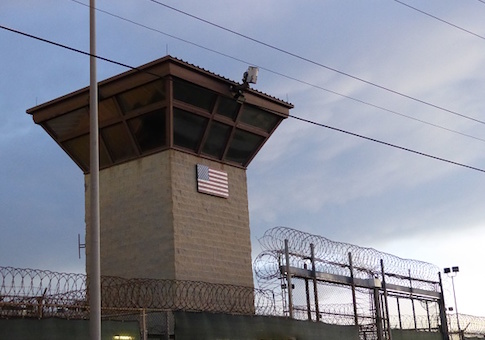 Trudeau: ISIS Fighters Returning Home to Canada ‘Can Be an Extraordinarily Powerful Voice for Preventing Radicalization’

Mattis Makes Unannounced Visit to Guantanamo, First Pentagon Chief to Go There Since 2002