Russia is doubling the number of its strategic nuclear warheads on new missiles by deploying multiple reentry vehicles that have put Moscow over the limit set by the New START arms treaty, according to Pentagon officials.

A recent intelligence assessment of the Russian strategic warhead buildup shows that the increase is the result of the addition of multiple, independently targetable reentry vehicles, or MIRVs, on recently deployed road-mobile SS-27 and submarine-launched SS-N-32 missiles, said officials familiar with reports of the buildup.

"The Russians are doubling their warhead output," said one official. "They will be exceeding the New START [arms treaty] levels because of MIRVing these new systems."

The 2010 treaty requires the United States and Russia to reduce deployed warheads to 1,550 warheads by February 2018.

The United States has cut its warhead stockpiles significantly in recent years. Moscow, however, has increased its numbers of deployed warheads and new weapons.

The State Department revealed in January that Russia currently has exceeded the New START warhead limit by 98 warheads, deploying a total number of 1,648 warheads. The U.S. level currently is below the treaty level at 1,538 warheads.

Officials said that in addition to adding warheads to the new missiles, Russian officials have sought to prevent U.S. weapons inspectors from checking warheads as part of the 2010 treaty.

The State Department, however, said it can inspect the new MIRVed missiles.

Disclosure of the doubling of Moscow’s warhead force comes as world leaders gather in Washington this week to discus nuclear security—but without Russian President Vladimir Putin, who skipped the conclave in an apparent snub of the United States.

The Nuclear Security Summit is the latest meeting of world leaders seeking to pursue President Obama’s 2009 declaration of a world without nuclear arms.

Russia, however, is embarked on a major strategic nuclear forces build-up under Putin. Moscow is building new road-mobile, rail-mobile, and silo-based intercontinental-range missiles, along with new submarines equipped with modernized missiles. A new long-range bomber is also being built. 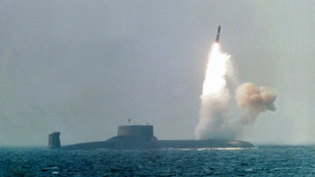 "Russia's modernization program and their nuclear deterrent force is of concern," Adm. Cecil Haney, commander of the U.S. Strategic Command, which is in charge of nuclear forces, told Congress March 10.

"When you look at what they've been modernizing, it didn't just start," Haney said. "They've been doing this quite frankly for some time with a lot of crescendo of activity over the last decade and a half."

By contrast, the Pentagon is scrambling to find funds to pay for modernizing aging U.S. nuclear forces after seven years of sharp defense spending cuts under Obama.

Earlier this month, Gen. Joseph Dunford, chairman of the Joint Chiefs of Staff, told Congress that Russia continues to pose the greatest threat to the United States.

In addition to a large-scale nuclear buildup, Russia has upgraded its nuclear doctrine and its leaders and officials have issued numerous threats to use nuclear arms against the United States in recent months, compounding fears of a renewed Russian threat.

Blake Narendra, spokesman for the State Department’s arms control, verification, and compliance bureau, said the Russian warhead build-up is the result of normal fluctuations due to modernization prior to the compliance deadline.

"The Treaty has no interim limits," Narendra told the Free Beacon. "We fully expect Russia to meet the New START treaty central limits in accordance with the stipulated timeline of February 2018. The treaty provides that by that date both sides must have no more than 700 deployed treaty-limited delivery vehicles and 1,550 deployed warheads."

Both the United States and Russia continue to implement the treaty in "a business-like manner," he added.

Mark Schneider, a former Pentagon official involved in strategic nuclear forces, however, said he has warned for years that Russia is not reducing its nuclear forces under the treaty.

Since the New START arms accord, Moscow has eliminated small numbers of older SS-25 road-mobile missiles. But the missiles were replaced with new multiple-warhead SS-27s. 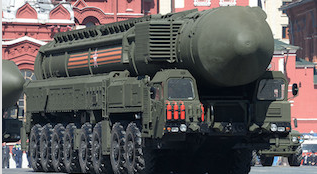 "The Russians have not claimed to have made any reductions for five years," Schneider said

Additionally, Russian officials deceptively sought to make it appear their nuclear forces have been reduced during a recent nuclear review conference.

"If they could have claimed to have made any reductions under New START counting rules they would have done it there," Schneider said.

The Obama administration also has been deceptive about the benefits of New START.

Deployment of new multiple-warhead SS-27s and SS-N-32s are pushing up the Russian warhead numbers. Published Russian reports have stated the missiles will be armed with 10 warheads each.

"When President Obama made his speech in Prague, I thought we were really set for major progress in this field [disarmament]," Perry said in remarks at the Atlantic Council.

However, Russian "hostility" to the United States ended the progress. "Everything came to a grinding halt and we’re moving in reverse," Perry said.

Other nuclear powers that are expanding their arsenals include China and Pakistan, Perry said.

Perry urged further engagement with Russia on nuclear weapons. "We do have a common interest in preventing a nuclear catastrophe," he said.

Perry is advocating that the United States unilaterally eliminate all its land-based missiles and rely instead on nuclear missile submarines and bombers for deterrence.

However, he said his advocacy of the policy "may be pursuing a mission impossible."

"I highly doubt the Russians would follow suit" by eliminating their land-based missiles, the former secretary said.

Additionally, Moscow is building a new heavy ICBM called Sarmat, code-named SS-X-30 by the Pentagon, that will be equipped with between 10 and 15 warheads per missile. And a new rail-based ICBM is being developed that will also carry multiple warheads.

Another long-range missile, called the SS-X-31, is under development and will carry up to 12 warheads.

Schneider, the former Pentagon official, said senior Russian arms officials have been quoted in press reports discussing Moscow’s withdrawal from the New START arms accord. If that takes place, Russia will have had six and a half years to prepare to violate the treaty limits, at the same time the United States will have reduced its forces to treaty limits.

"Can they comply with New START? Yes. They can download their missile warheads and do a small number to delivery systems reductions," Schneider said. "Will they? I doubt it. If they don’t start to do something very soon they are likely to pull the plug on the treaty. I don’t see them uploading the way they have, only to download in the next two years."

The White House said Moscow’s failure to take part in the nuclear summit was a sign of self-isolation based on the West’s sanctions aimed at punishing Russia for the military takeover of Ukraine’s Crimea.

A Russian official said the snub by Putin was directed at Obama.

"This summit is particularly important for the USA and for Obama—this is probably why Moscow has decided to go for this gesture and show its outrage with the West's policy in this manner," Alexei Arbatov, director of the Center for International Security at the Russian Academy of Sciences, told the business newspaper Vedomosti.

A Russian Foreign Ministry official, Mikhail Ulyanov, told RIA Novosti that the summit was not needed.

"There is no need for it, to be honest," he said, adding that nuclear security talks should be the work of nuclear physicists, intelligence services, and engineers.

"The political agenda of the summits has long been exhausted," Ulyanov said.