The report, which was declassified by the IDF earlier this week, includes previously unreleased statistics and military surveillance videos showing Hamas launching missiles from many of these civilian locations, which constitutes a war crime.

New evidence is presented that Hamas used several United Nations schools run by the Relief Works Agency (UNRWA) as a base from which to fire rockets and mortars.

The revelation is likely to prompt further scrutiny of UNRWA’s activities during the most recent conflict, including the discovery of multiple rocket stashes that were later returned by UNRWA to Hamas.

At least 1,600 of the 3,600 rockets fired since July 8 at Israel by Hamas originated from civilian strongholds, according to the declassified report.

This included: Three rockets fired from churches, four from Red Cross stations, 10 from amusement parks, 20 from first aid stations, 30 from U.N. facilities, 41 from hospitals, 50 from children’s playgrounds, 85 from medial clinics, 248 from schools, 331 from mosques, and 818 from areas such as graveyards and power plants. 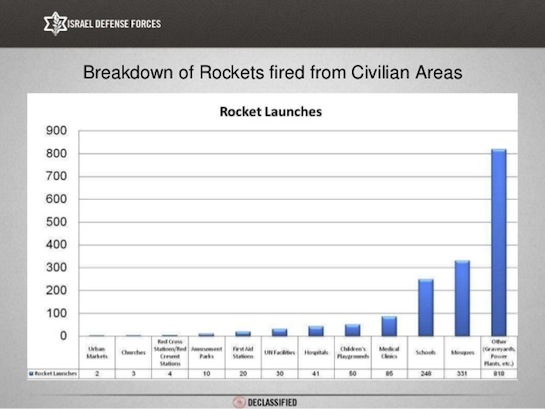 The IDF maintained that Hamas is chiefly responsible for the destruction of civilian areas in the Gaza Strip.

"Hamas’ tactics flagrantly violate international law and the most basic moral precepts," the IDF stated in the report. "Given these tactics, the ultimate responsibility for the damage done to civilians as well as the civilian infrastructure of Gaza lies with Hamas."

The report included video footage and surveillance photos of Hamas erecting rocket launchers at a U.N. facility and hotel where journalists were residing. Militants can be seen in the footage building the rocket launcher beneath a blue tent outside of the hotel.

Additional aerial satellite imagery released in the report shows that at least one rocket launcher was erected in a U.N.-operated elementary school for girls in Beit Lahiya.

Other rocket launchers were shown to have been set-up at UNRWA’s Shahada Al-Manar elementary school for boys, from which at least 11 mortars were fired on Aug. 2, according to satellite imagery.

Another rocket launching site was discovered at an UNRWA distribution center and health center in Gaza, according to video showing Hamas terrorists firing the rockets form the facility, which is located in a residential neighborhood.

Multiple other images show scores of rocket launchers and combat posts placed in densely populated areas throughout Gaza in what the IDF refers to as a "terror fortress."

Hamas also has been discovered to have fired rockets from inside the El’ Ahzar Islamic College in Gaza, as well as the Abu Nur School, according to IDF military footage included in the report

"It looks like the rocket launchers are inside the school," adds another soldier.

Several of these mosques and civilian homes located nearby were used to conceal the entrances to Hamas’ sophisticated network of underground tunnels, many of which have been destroyed by the IDF in the past weeks.

On July 30, Hamas began firing rockets from a Red Cross ambulance station, according to the report.

Rocket launchers also were found to have been strategically placed around the Wafa Hospital in Gaza.

IDF footage also shows Hamas militants using an ambulance as a getaway vehicle after firing rockets from a house.