Beijing adds 130 bombers in past year and trained for strikes on U.S. bases

China added significant numbers of bombers to its military forces in the past year as part of a large-scale military buildup targeting the United States, a Pentagon's report on the Chinese military says.

"Over the last three years, the PLA has rapidly expanded its overwater bomber operating areas, gaining experience in critical maritime regions and likely training for strikes against U.S. and allied targets," the report said.

"China is advancing a comprehensive military modernization program aimed at making the PLA into a ‘world-class' military by 2049," the report said. "This program includes improvements to military capabilities to conduct nuclear deterrence, anti-access/area denial (A2/AD), and power projection operations."

One striking disclosure in the report is the buildup of Chinese bombers.

Over the past year, the number of Chinese bombers and strike aircraft increased by 130, from 400 bombers in 2016 year to 530 bombers last year.

Special mission aircraft, such as transport and refueling planes, also increased by 15.

The total number of active ground troops also increased over the past year with the addition of 65,000 combat troops.

The increase is unusual since China has been seeking to streamline its ground forces by retiring large military personnel.

The PLA reduced the number of group armies around the country from 18 to 13 over the past year.

Military reforms have led to large-scale protests in Beijing and several others cities by groups of former PLA soldiers seeking better treatment from the government.

China also added 400 tanks and 2,600 artillery pieces over the past year.

Strategic nuclear forces in China also are expanding and the report said the PLA is increasing the readiness of its nuclear forces.

"China is enhancing peacetime readiness levels for these nuclear forces to ensure responsiveness," the report says.

Chinese military writings indicate the PLA Rocket Forces, the service in charge of nuclear systems, have discussed the use of "launch on warning"—a heightened readiness for attacks based on improved surveillance of foreign nuclear forces and streamlined military decision-making "to enable a more rapid response to enemy attack," the report said.

The Chinese also are developing a space-based early warning system to support the launch on warning nuclear posture.

Launch on warning refers to nuclear posturing that calls for launching nuclear missiles from launchers and bombers before an enemy's warheads or bombs reach targets in China.

Most of China's nuclear strike forces are long- and medium-range missiles and all are being upgraded as part of the buildup.

The current force of up to 100 ICBMs includes six types of solo-based and road-mobile missiles including many equipped with multiple, independently targeted reentry vehicles or MIRVs.

Two additional missiles are in development, including the multiple-warhead DF-41—to be deployed on road-mobile, rail-mobile and silo launchers, and an additional road-mobile ICBM.

China also is expanding its submarine forces with new ballistic missile and attack submarines. Four nuclear missile submarines are deployed and at least one more is under construction. 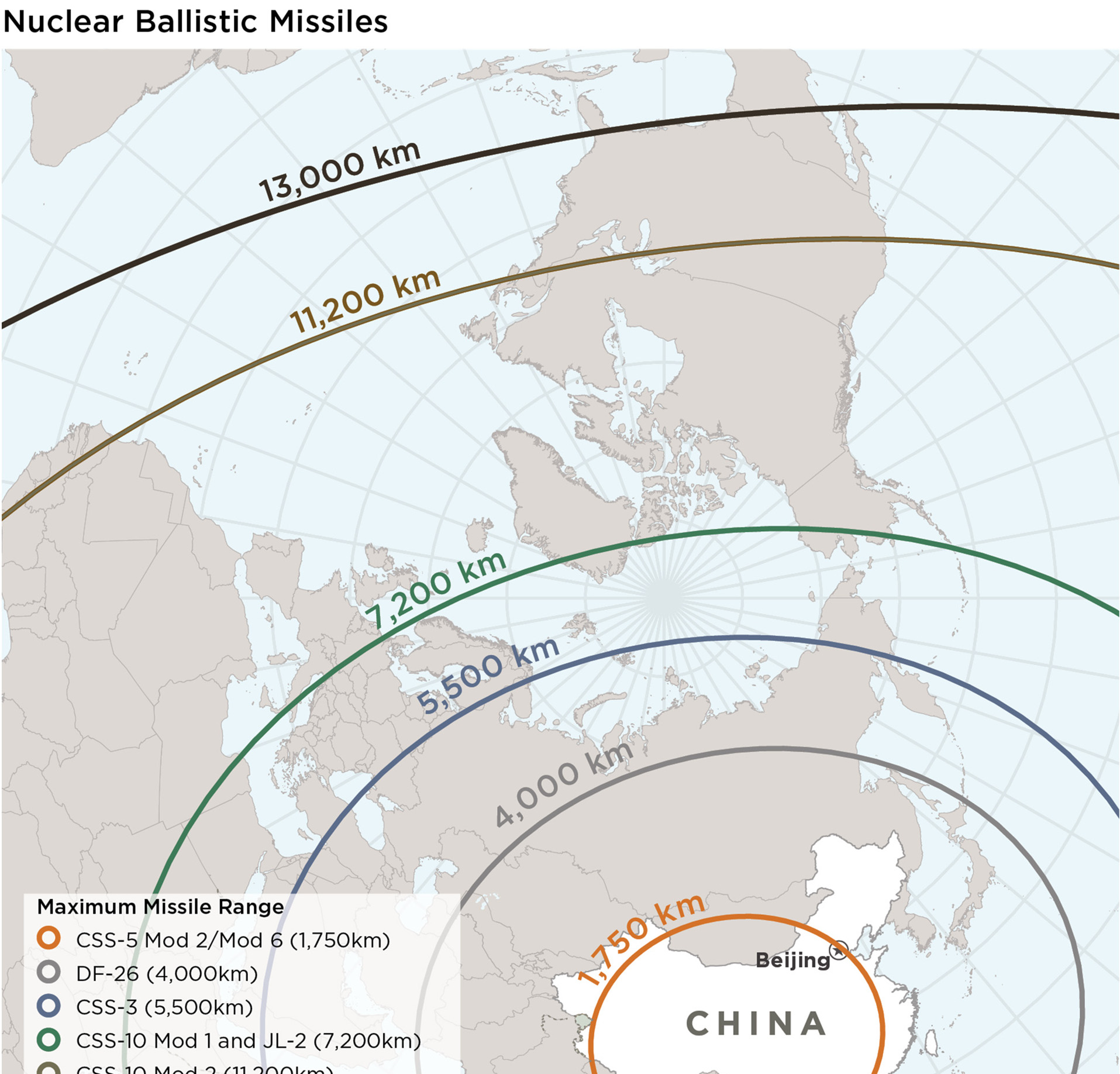 A follow-on missile submarine will be built in the early 2020s and will be armed with a new submarine-launched ballistic missile.

Chinese bombers currently include the H-6 and plans are underway for an advanced stealth bomber similar to the U.S. B-2 that the Pentagon says will be designated the H-20.

The new stealth bomber will be deployed in the next decade with a range of at least 5,281 miles and a payload of 10 metric tons—for both nuclear and conventional missiles.

China also appears to be building a new refuelable bomber that could be deployed before the H-20 that will expand offensive bomber capabilities far into the western Pacific.

Two new air-launched ballistic missiles are being developed, one of which will be nuclear armed.

China claims to adhere to a "no-first-use" nuclear policy that states Beijing would not be the first to use nuclear arms in a war.

However, the Pentagon is questioning Beijing's sincerity regarding the pledge. PLA officers have written that nuclear weapons might be used first if a conventional attack threatens China's nuclear arsenal, much of which is hidden in deep underground bunkers, the report said.

"China’s lack of transparency regarding the scope and scale of its nuclear modernization program raises questions regarding its future intent," the report said.

In addition to expanding nuclear missiles and bombers, China is upgrading its nuclear command and control systems to handle both expanded mobile missiles and missile submarine patrols.

The command and control networks are needed to "safeguard the integrity of nuclear release authority for a larger, more dispersed force," the report said.

Regarding increased regional bomber capabilities, the report said the H-6K variant poses a threat to U.S. military bases in the western Pacific, including Guam.

The longer-range H-6K bomber is armed with long-range cruise missiles that provide the PLA air force with "an offensive strike capability against Guam" with land attack cruise missiles.

The strike capability has been improved by China's use of airborne warning and control aircraft to support the bomber flights.

China in 2016 flew bombers around rival Taiwan in a show of force, and also flew the bombers in the South China Sea.

"H-6s could, if deployed to airfields in the Spratly Islands, extend their range through the Balabac Strait into the Celebes Sea or through the Sunda or Malacca Strait to fly into the Indian Ocean," the report said.

China also recently flew six H-6 bombers for the first time through the Sea of Japan. 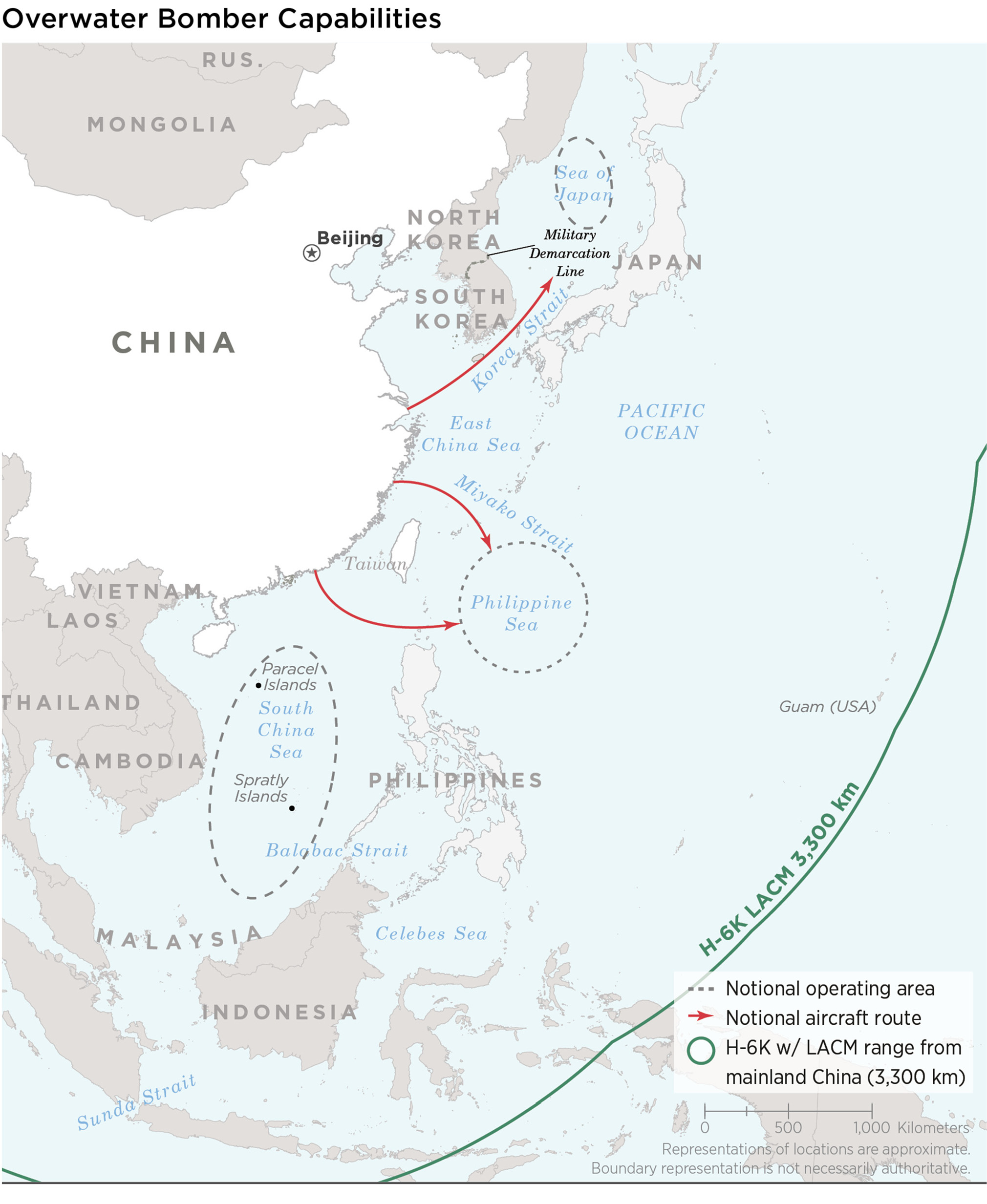 "These flights demonstrated a maturing capability for H-6K bombers to conduct off-axis strikes against U.S. and allied facilities," the report said.

Rick Fisher, a China expert with the International Assessment and Strategy Center, said the Pentagon's disclosure on China's nuclear forces is significant.

"There is overdue focus on the PLA air force's nuclear mission, meaning the PLA now has a nuclear triad, and there is great analysis of China's coercive use of its H-6K bombers in 2017 to coerce Taiwan and to threaten Guam," Fisher said.

"In several areas this year's PLA report makes clear that the PLA is building up to become a global military challenge to American interests," he added.

The report mentions China's development and testing of hypersonic glide vehicles that the Pentagon has said can be used for both nuclear and conventional attacks, but provides no details.

China, Russia, and the United States are all working to develop hypersonic missiles—those capable of maneuvering en route to targets while traveling at over 7,000 miles per hour.

China has develop an advance integrated air defense system of radar, sensors and missiles that include a variety of very capable anti-aircraft and anti-missile interceptors, including plans to purchase Russia's S-400 system in the future.

In the South China Sea, China continued to build up military facilities on disputed islands.

"Outposts may be capable of supporting military operations, but no permanent large-scale air or naval presence has been observed in the Spratly Islands," the report said.

The report said China "could be attempting to bolster its de facto control by improving military and civilian infrastructure in the South China Sea."

"The airfields, berthing areas, and resupply facilities will allow China to maintain a more flexible and persistent coast guard and military presence in the area," the report said. "This would improve China’s ability to detect and challenge activities by rival claimants or third parties, widen the range of capabilities available to China, and reduce the time required to deploy them."

In the East China Sea, China kept coast guard ships regularly near Japan's Senkaku Islands that China is claiming as its territory.

The report said Beijing is using "low-intensity coercion" in the maritime disputes.

The Pentagon touted its ongoing military engagement with China that includes exchange visits by U.S. and Chinese officials in the report.

However, the report made no mention that the Pentagon disinvited the PLA from taking part in the large international naval exercise called Rim of the Pacific that ended earlier this month.

The Chinese were blocked over the Pentagon's displeasure at continued militarization in the South China Sea.