State-run Korean Central Television, in a 54-minute video, included a report that said the missile launch was observed in December by North Korean leader Kim Jong Un, who was shown standing on a ship as the missile is ejected from underneath the water and then blasts off.

The missile test was first reported Monday by the Washington Free Beacon.

Defense officials said the successful test followed an earlier test failure on Nov. 27 that nearly sank North Korea’s missile-firing submarine, known as the Gorae, or Whale. The November ejection test caused significant damage, and the submarine was observed returning to the port of Sinpo listing at a 45-degree angle.

U.S. officials said the launch was carried out near Sinpo, a port city on the east coast of North Korea.

However, the successful Dec. 21 test shown in the North Korea video has altered U.S. intelligence assessments of what is believed to be a new strategic nuclear strike capability.

The new submarine missile could be deployed by the North Koreans with a nuclear warhead within a year, according to the officials.

The video shows a missile the Pentagon calls the KN-11 ejecting from underwater and reaching about 130 feet in the air, followed by its engine igniting and flying into a cloud-covered sky. Later in the video, the missile is shown from a distance as it clears the clouds and flies over the sea. 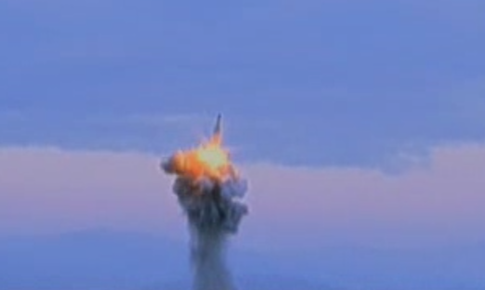 A South Korean intelligence official told the Yonhap news agency that the North has not completed development of the new submarine-launched missile.

"The country seems to be in the stage of the ejection testing, but not in the completion stage," the official said.

Kim was shown in the video wearing a winter coat and hat on a military vessel providing what the North Koreans call field guidance. 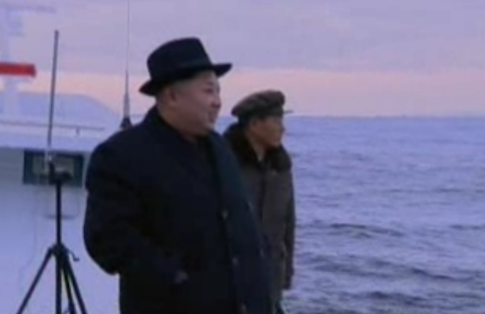 U.S. intelligence agencies estimate that the nuclear test produced a small-yield blast, and could be evidence of the development of a two-stage thermonuclear device.

North Korea hailed the test as a breakthrough in its effort to build a nuclear arsenal against what it regards as hostile foreign forces.

North Korea is believed to be capable of deploying a small nuclear warhead on a missile and has several types of missiles capable of delivering such warheads.

The long-range system is called the Taepodong. In addition to the launch-pad based Taepodong, North Korea has a small number of road-mobile intercontinental ballistic missiles, designated as KN-08 missiles by the Pentagon.

Officials have said the KN-08 has been extensively tested in all aspects of its development, except flight testing.

The KN-11, the submarine-missile, is believed to be based on a SS-N-6 SLBM (submarine-launched ballistic missile) obtained covertly from Russia and reverse-engineered into a missile the North Koreans call the Musudan.

The Gorae submarine is believed by U.S. intelligence to be either a refurbished Russian Golf II-class missile submarine, or an indigenous North Korean submarine based on the Golf II design.

Asked about North Korean’s missile and nuclear developments in October, Adm. Cecil Haney, commander of the U.S. Strategic Command, which is in charge of nuclear forces, called the rogue state "a real threat."

"It’s very disturbing to know, even though we have not seen them test end to end, the KN-08 intercontinental ballistic missile, and not just that, as we look at some of their other capabilities, the Musudan and the number of SCUDs and everything else they have, it’s looking at that whole complete picture and their provocative nature that’s disturbing," Haney said.