"Everyone needs to face up to the reality of emergency," Kim said.

North Korean state media alleged the infected person was an escapee to South Korea who left three years ago. The person reportedly displayed symptoms of COVID-19 after crossing the border back into North Korea.

The emergence of COVID-19 occurs at a troubling time for North Korea. The United Nations recently condemned Pyongyang’s violation of oil sanctions. Weeks before, the Kim regime refused to meet with American diplomats, while cutting off diplomatic communications with South Korea.

In May, a whirlwind series of later disproven rumors alleged that Kim Jong Un had died.

Though North Korea’s footing seems weak, Washington remains steadfast in committing to deescalating tensions with the communist regime. "We continue to try to work with the North Koreans to achieve" a mutually beneficial economic and security relationship, Secretary of State Mike Pompeo told the Economic Club of New York on July 15.

"I’m hopeful that we’ll be able to have a senior discussion before too long and hopefully advance the ball in that respect," Pompeo said. 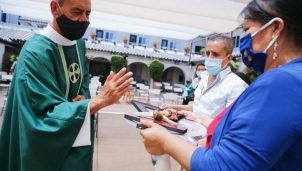