The National Guard reservist charged on Monday with attempting to blow up the Los Angeles subway allegedly possessed terrorist manuals on how to be a "lone wolf" terrorist and was a frequent reader of al Qaeda’s Inspire magazine, which provides tips on how to make and detonate various bombs, according to FBI court documents.

The FBI charged Nicholas Teausant, a 20-year-old National Guard reservist, with attempting to help al Qaeda carry out a plot to attack the subway system in Los Angeles.

Teausant was a frequent Internet contributor to forums for would-be terrorists and is said to have owned a copy of the One Mujahid Pocketbook, which instructs readers on how to be a "lone wolf" terrorist and construct bombs.

The guide includes passages on "torching parked vehicles," "bomb making," "remote control detonation," and "tips for our brothers in the united snakes of America," according to the criminal complaint filed against Teausant.

He allegedly obtained the guidebook by downloading it from a "library computer," according to the complaint.

Teausant also claimed to be a frequent reader of al Qaeda’s Inspire magazine, the most recent issue of which includes an article on how to make car bombs that can be detonated in U.S. cities.

Teausant allegedly texted an FBI informant in October of last year to say that "he had been reading Inspire and was upset and wanted to help the ‘Blind sheikh,’" Omar Abdel-Rahman, a terrorist leader who is currently serving life in prison.

"We HAVE TO DO SOMETHING NOW!" Teausant texted to the informant, according to the FBI complaint.

The FBI found excerpts of Inspire magazine on Teausant’s laptop following a forensic analysis, according to the complaint.

Teausant also searched the web for things such as "how to build a bomb," and "where can I buy an ISIS flag," otherwise known as the black flag used by terrorists.

Earlier in 2013, an Internet user believed to be Teausant posted in forums about bringing "America to its knees" and claimed that he wants to "to go fight in Syria."

When asked in June of that year by an Internet user, "Which foreign country do you dislike the most?" Teausant allegedly replied, "I live in it."

A Facebook page that appears to be associated with Teausant includes violent imagery of a man shooting another person in the head. The picture is tagged with the word "Jews." 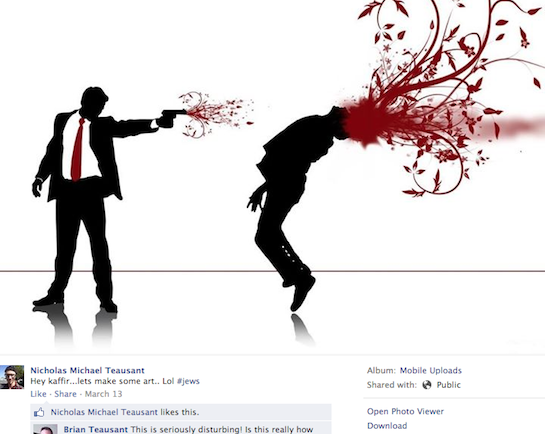 A posting from 9:17 p.m. on Sunday on the Facebook page states that the person believed to be Teausant intended to travel to London. A comment on this posting by Alicia Halderman Teausant, believed to be his mother, pleads with him not to leave the country. 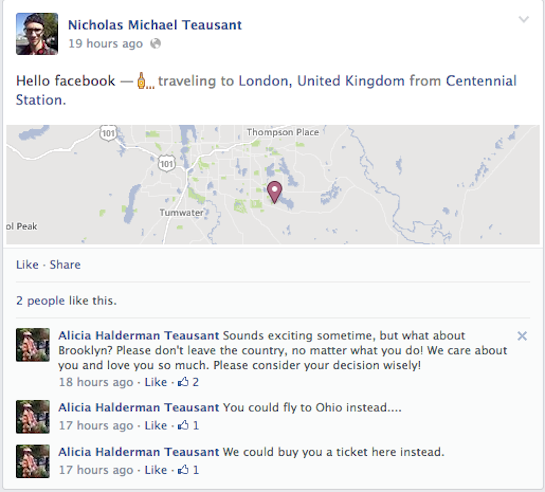 "Please don't leave the country, no matter what you do!" Alicia Halderman Teausant wrote. "We care about you and love you so much. Please consider your decision wisely!"

Teausant was arrested by the FBI at around 11:40 p.m. on Sunday, according to the complaint.

"Just short of the Canadian border, U.S. Customs and Border Protection performed an outbound border stop on the bus" Teausant was riding, according to the complaint. "Teausant advised he was traveling to Vancouver, Canada, after which he was removed from the bus and placed under arrest."