Military dog handlers are pushing legislators to change a law that has kept many of them from being reunited with their canines after serving alongside them overseas.

With help from the American Humane Association (AHA), the nation’s oldest animal welfare organization, retired dog handlers are lobbying for changes to this year’s National Defense Authorization Act (NDAA). On April 14 and 15, they met with staffers from both parties in the Senate and House of Representatives. 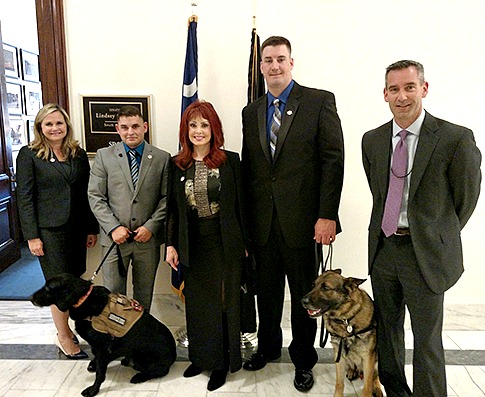 The handlers and the AHA want the law to say that military working dogs shall be returned to the United States after their tours of duty—not that they only "may be returned," as the law currently states. They also want to ensure that records are kept of which dog serves with which handler and that those handlers get the first opportunity to adopt each dog upon the canine’s retirement from service.

"A simple word change is all we’re asking for," said Robin Ganzert, president and CEO of the AHA. "When they’re retired overseas, they’re civilian status. They can no longer fly in military transport," she said.

Their changed status makes bringing dogs retired overseas back to the states expensive. Ganzert said the AHA spent nearly $6,000 to bring a dog named Maxie back from Japan last year. "We’re asking that that change so they shall be brought home to the U.S. so that we can help reunite those dogs when they’re already back on U.S. soil," she said.

It’s important to reunite handlers and their dogs in order to help both heal from the traumas they may have endured overseas, according to Ganzert. "It’s about healing both ends of the leash," she said. "It’s about compassion."

Jeff DeYoung, a former Marine who met with congressional staff alongside Ganzert and his dog, Cena, last month has experienced that healing first hand. "When I joined the Marine Corps in 2008 and I underwent all my training for my main job. When I got to my main unit in 2009 I was paired up as a dog handler," he said. "I was originally a combat engineer by trade, which is finding IEDs [improvised explosive devices] and explosives using a metal detector. It was a special billet, kind of like a temporary job, where you operate a dog for a deployment."

"During our deployment time in 2009 and '10 we were effectively one of the first K9 units into the Marjah operation, biggest offensive in Afghanistan to date. We lost quite a few friends there and Cena was there to help me through all of it."

Despite the close connection DeYoung and Cena developed, they were separated immediately after returning home. "When we had gotten back from Afghanistan, April 25, 2010, we were separated," DeYoung said. "They put us on a bus and drove us away while the dogs were still on the plane."

He continued: "No goodbyes. No anything."

DeYoung said having Cena taken away from him had a profound effect on his life. "So over the past four years, five years now, I’ve battled PTSD," he said. "I had one suicide attempt. I had alcohol dependency. Slight drug dependency as well."

"Through all of this, I just wanted the dog back. I wanted him to be safe and be happy. To be found. I didn’t know anything about what happened to him."

DeYoung nearly lost Cena for good. A group that had acquired the dog from his original owner was less than a week away from giving him to a civilian family before DeYoung finally managed to contact them.

DeYoung said having Cena back in his life has changed things dramatically. "He’s been living with me for close to a year now, and I’ve seen a nearly 80 percent reduction, personally, in my PTSD symptoms," he said. "I don’t hallucinate. I don’t have nearly as many nightmares."

"I can sit in a room full of people and not have to stare at the doors or find the exits. You know, I’m not casing out who is in the room, where the threats are. He comes in. He checks it out. And I trust his judgment for it."

"So, it’s been phenomenal having him because I can do things now. I can go to places and sporting events and places I usually wouldn’t be able to go like airports, just because it’s too many people. So, having him back, it’s been a huge lifesaver."

"He has saved my life," DeYoung said.

Brent Grommet, a former soldier who also spoke with lawmakers alongside his dog Matty, feels the same way. 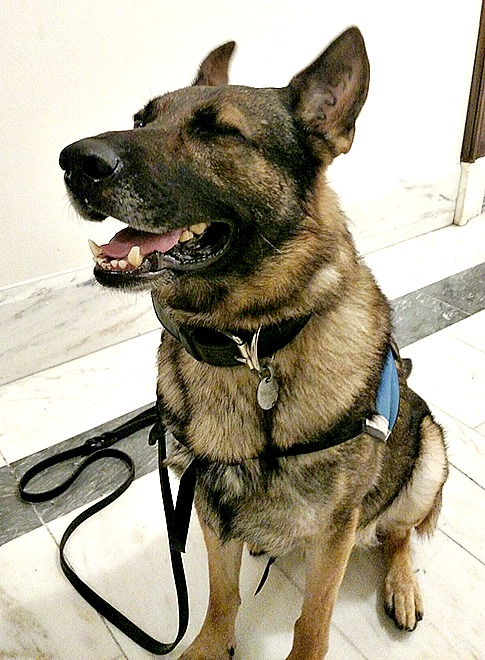 "I was originally an infantryman in the 101st Airborne," Grommet said. "We started utilizing a program with an explosive detector dog. Then I went off to school and met Matty. There we trained together 24 hours a day. We had three months to get ready to deploy. He was a brand new dog. He just came of age to where we could deploy and I had to get him ready to certify and go."

"That definitely made everything a little bit more of a struggle but a lot more worth it in the long run."

After training, Grommet and Matty were deployed to Afghanistan where they were tasked with finding IEDs. "We were out looking for homemade explosives every day," Grommet said. "For mines, RPG heads, anything like that."

"We ended up both getting injured in an IED blast. He ended up messing up his left knee. I ended up with a [traumatic brain injury] TBI and broke my lower back in two places."

When he realized both would be headed back to the United States, Grommet tried to adopt Matty before they even left for home.

"Before I left Afghanistan, because I knew he was going to be retired, because if you can’t work a dog they don’t keep them, that’s just how it is, he can’t run, jump a lot, anything like that without it swelling up and giving him problems, I had filled out all my adoption paperwork there and put it in his medical packet, his medical packet is supposed to always stay with them," he said. "We got back to stateside they gave us 10 minutes to say goodbye to our dog. Then they loaded him into a truck and then he screamed and tried to chew the door off and dig his way out of a steel box until I couldn’t see him anymore."

"Then I actually lost track of him."

Eventually, Grommet was able to find Matty, who was being treated by the Red Cross at Fort Bragg. He again filed adoption papers but still couldn’t get Matty.

"The day I came out of neurosurgery they called to tell me that they’d given my dog away to another family."

Reuniting with Matty changed everything for Grommet. "It’s like losing your kid and finding him again," he said. "The way we worked, the way we deployed, I didn’t have a unit. I belonged to a brigade and I worked for anybody who requested a dog team. So, from there, I worked with a lot of different units every day. "

"I never had one set platoon that I was traveling with. I had him."

"I think they’re the greatest people on the planet," said Naomi Judd, the country music star, who accompanied the dog teams through the halls of Congress and helped the AHA lobby on their behalf.

"I just feel so strongly that we have to figure out how to take care of both of them because they’re actually a unit. They are one in the same. We have to acknowledge that," Judd added.

The AHA has a long history of caring for and supporting military animals. "We’ve actually been working with the military now for 100 years." Ganzert said.

Those reunions each had to overcome significant challenges.

"There’s a lot of problems," Grommet, the Army dog handler, said. "For the Army, nobody knew I had him. I had to actually prove that I had Matty. It shouldn’t be like that."

Hence the committee’s change to the language in their mark-up of the NDAA. "We amended the current law to "require" (vs. permit) dogs be made available for adoption to handlers or their families and codified the priority order of adopters," Chafin said. "The NDAA will be considered by the full House this week."

If the House approves the NDAA, it will be sent to conference committee for the Senate and House to approve.

DeYoung, the Marine, intends to keep pursuing the issue no matter the outcome of the current legislative effort.

"I’m very committed to it and very passionate about it just because I’ve seen the difference," DeYoung said.

"Just having him back," he said. "It’s like getting your family member back."