The United States is losing the capability to conduct underground nuclear tests that could be needed in the future to gauge the reliability of the nuclear arsenal.

According to John C. Hopkins, former head of nuclear testing at Los Alamos National Laboratory, the Energy Department needs to bolster testing capabilities that could be needed in a future national emergency.

"With every day that passes, the United States grows more out of practice and out of resources—including the most important resource: people with experience—that are critical to nuclear testing," Hopkins stated in an article published Wednesday in the Los Alamos newsletter.

He urged the three national laboratories, Los Alamos, Lawrence Livermore, and Sandia, to set up a unified test preparation program.

"The time delay following the decision to resume testing would, in my opinion, be dangerously long," Hopkins said, adding that archiving of past testing procedures should be carried out right away. 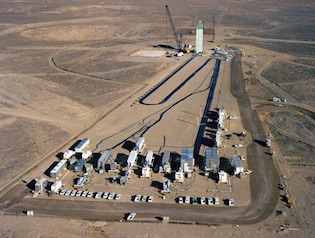 Hopkins is among a dwindling number of experts involved in past U.S. nuclear tests. He took part in five atmospheric tests in the Pacific and 170 tests in Nevada through the 1980s.

Based on his experience and knowledge of what is needed in terms of skills, equipment, facilities, and infrastructure for a full-scale nuclear test, "I have grown increasingly concerned at the steady degradation of U.S. nuclear test readiness—that is, the capability of the United States to test its nuclear weapons should the need to do so arise," Hopkins said.

The U.S. government halted all large nuclear tests in 1992 and further codified the ban by adopting an international moratorium on nuclear testing in 1996 under the Comprehensive Nuclear Test Ban Treaty. The treaty was signed and informally adopted despite never being ratified by the Senate over concerns its anti-testing provisions could not be verified.

Disclosure of the nuclear testing problems comes as President Donald Trump has called for building up nuclear arms.

"It would be wonderful, a dream would be that no country would have nukes, but if countries are going to have nukes, we're going to be at the top of the pack," the president said.

In December, after Russian President Vladimir Putin announced Russia was bolstering its nuclear forces, Trump said the United States would do the same.

"The United States must greatly strengthen and expand its nuclear capability until such time as the world comes to its senses regarding nukes," he stated on Twitter Dec. 22.

Under former President Barack Obama, U.S. nuclear weapons were downgraded in U.S. defense policy. As a result, the current arsenal is rapidly aging and in need of modernization. The modernization is expected to cost tens of billions of dollars over the next decade or more.

Hopkins stated that a review of assessments by the Energy Department, which is in charge of nuclear testing, has raised questions about whether the department could resume nuclear tests in two to three years as legally required under a 1993 presidential directive.

The directive, PDD-15, states that the Energy Department must formulate a plan to "protect the capability to resume U.S. nuclear testing."

Nuclear testing would need to be resumed if the United States builds new, more efficient, and safer nuclear arms.

Both Russia and China are rapidly building up their nuclear forces. China recently tested a long-range missile that in the past carried a single warhead with 10 multiple, independently targetable reentry vehicles, or MIRVs, signaling a major boost in its warhead arsenal.

Russia is building new missiles, bombers, and submarines for its arsenal and currently is above the warhead limits for the 2010 New START arms treaty, which requires cutting deployed warheads to 1,550 by 2018.

Moscow also is building a new unmanned underwater submarine capable of delivering a huge nuclear warhead that can destroy entire harbors. The drone is called Kanyon by the Pentagon. Its existence was leaked by Russian state media.

The Russian military also is developing very low-yield nuclear weapons that could be used in regional conflicts.

During the Cold War, nuclear tests at the Nevada Test Site, now the Nevada National Security Site, were carried out once per day on average.

The 1,375-square-mile test site is located about 65 miles northwest of Las Vegas and was used from 1951 to 1992 for 928 atmospheric and underground nuclear tests.

A nationwide industry of more than 100,000 highly trained experts was involved during nuclear testing.

Hopkins stated that today "much, if not most, of the equipment and technology required for nuclear testing in the past has not been adequately maintained, is obsolete, or has been sold or salvaged."

"More importantly, the knowledge needed to conduct a nuclear test, which comes only from testing experience, is all but gone too," he said, adding that there is no federal funding to support maintaining nuclear test readiness.

"The whole testing process—whether to conduct one test or many—would in essence have to be reinvented, not simply resumed," Hopkins said.

"The danger is enhanced by the fact that a quarter century without both U.S. nuclear testing and serious design work on new types of nuclear weapons has created a situation in which we are also losing the ability to design new weapons," Schneider said.

Schneider said requests to allow nuclear tests below 1 kiloton were rejected years ago. "As a result, we have much higher costs and much less confidence in our life extended nuclear weapons," he said.

Three tests were carried out there from 1967 to 1971. However, the infrastructure on the island is gone and would need to be built up.

"In addition, Amchitka is now part of the Alaska Maritime National Wildlife Refuge, and going back there to test would certainly be concerning to environmentalists and native Alaskans," Hopkins said.

To conduct nuclear tests, many unique elements would need to be reconstituted, including facilities, materials, and equipment, including goods that are not commercially available.

Underground tests are conducted in shafts using special equipment, including a tall steel structure known as a rack that is 10 feet in diameter and more than 100 feet long. The rack must be surrounded by a tower that allows technicians to work on the test rack.

Some of the contractors that worked on nuclear tests remain in business, but many are defunct.

"A resumption of nuclear testing would involve a large, expensive, and complex program," Hopkins said.

"Because the United States has little left from its previous test program, and essentially no test-readiness program, the time delay following the decision to resume testing—because of a loss of confidence in the stockpile or to a geopolitical crisis—would, in my opinion, be dangerously long. Let’s not wait to find out how long."