Iranians Rally Around ‘Down With U.S.’ Social Media Campaign

Iranians stormed social media sites on Wednesday to participate in a new state-sanctioned campaign urging users to explain in a written message on their hand why they hate America and support its destruction, according to multiple posts and regional reports.

Launched to commemorate the 36th anniversary of Iran’s storming of a U.S. embassy complex in Tehran, Iranians young and old took to social media sites to publish pictures explaining why they continue to hate America.

The campaign, dubbed "Why Down With U.S.?" has already sparked thousands of posts by Iranians, according to Iran’s state-controlled Mehr News Agency.

Those who joined the social media blitz expressed anger at American "arrogance," its support for "Israel and terrorism," and its "martyring" of Iranian nuclear scientists.

The social media campaign comes as top Iranian officials, including Supreme Leader Ali Khamenei, amp up their anti-American rhetoric. These leaders say that Iran will continue to support anti-American activities and wage its regular "Death to America" celebrations despite the recent nuclear deal aimed at curbing Tehran's weapons program.

Khamenei, for instance, in a recent message to President Hassan Rouhani, instructed leaders to cease all further negotiations with America and continue campaigns to harm its interests. Iran also launched a blockade on all U.S. goods earlier this week.

Many Iranians depicted in the online images can be seen raising their hands, "showing to the camera the reasons why [the] Iranian nation still holds such a great amount of distrust and animosity toward the U.S. government," Mehr reported. 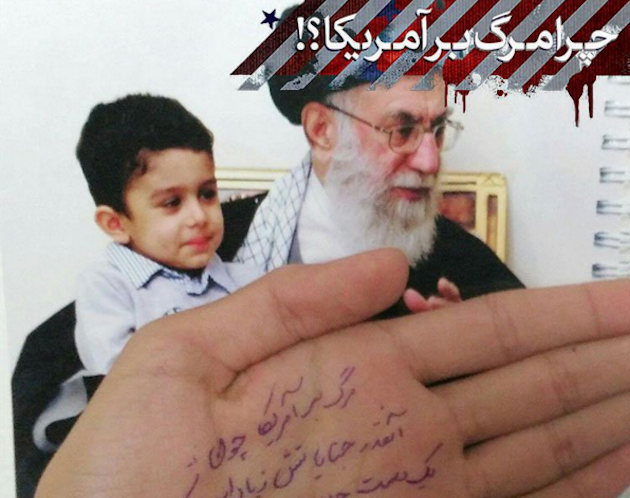 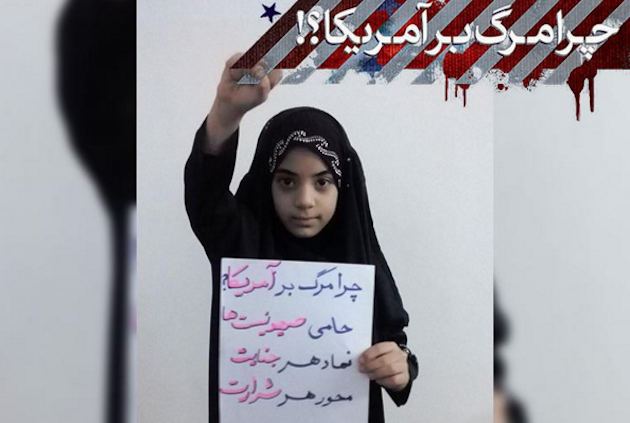 The messages express anger at the United States and accuse it of carrying out the murder and oppression of Iranians. Some critics have expressed anger at multiple pictures depicting young Iranian children, with one activist group, United Against Nuclear Iran, describing it as a "disgusting exploitation of children."

Some prominent Iranians participated in the campaign.

The parents of Mostafa Ahmadi Roshan, an Iranian nuclear scientist who was killed in a 2012 bombing attack, posted pictures online accusing America of sponsoring their son’s murder.

Emad Afroogh, a well-known Iranian academic, posted his own photo, writing on his palm, "The slogan ‘Down with U.S.’ is the least we can do in protest against all the oppressions the U.S. has exerted on us," according to the report.

Others who joined the campaign included messages honoring the "victims of chemical weapons" and accused America of "killing innocent people of Syria, Iraq, Yemen, Afghanistan, [and] Palestine," Mehr reported.

In addition to starting the "Down with U.S.?" online campaign, scores of Iranians took to the streets on Wednesday to burn American flags and chant in favor of America’s destruction.

Iran’s parliament voted earlier this week to continue supporting "Death to America" rallies held across the country each Friday.

"The martyr-nurturing nation of Iran is not at all prepared to abandon the slogan of ‘Death to America’ under the pretext of a nuclear agreement," a group of Iranian parliament members said in a statement carried by multiple news outlets.

Why Should We Believe Biden?