The State Department unveiled a new state-of-the-art training facility that aims to teach diplomats and security personnel how to survive a Benghazi-style attack, according to multiple U.S. officials who described the program as preparation for "the worst day of your life."

U.S. officials who provided an advance tour of the facility for a small group of reporters said the Benghazi terror attacks played an integral role in shaping not just the curriculum, but the manner in which it is taught.

Multiple officials who briefed reporters throughout the day described the training as preparation for "the worst day of your life."

"As you've seen essentially from 9/11 on, security is everybody's responsibility," one senior State Department official told the Washington Free Beacon. "That has also triggered a difference in what a student looks like. Now we need to train everybody."

The shadow of Benghazi loomed large at the facility's "fire as a weapon" training area, which includes several enclosed mazes that are filled with smoke. Groups of students are trained to navigate the area while blinded by the smoke and confused by sounds of gunfire and chaos broadcast throughout the maze.

The fire training began in 2013 as a "direct result" of the Benghazi attacks, which saw several U.S. diplomats, including Ambassador J. Christopher Stevens, killed due to the overwhelming amount of smoke and fire spreading through the embassy facility.

Since the attack, all State Department personnel stationed abroad are required to go through the simulated smoke environment to prepare for similar types of terror attacks. 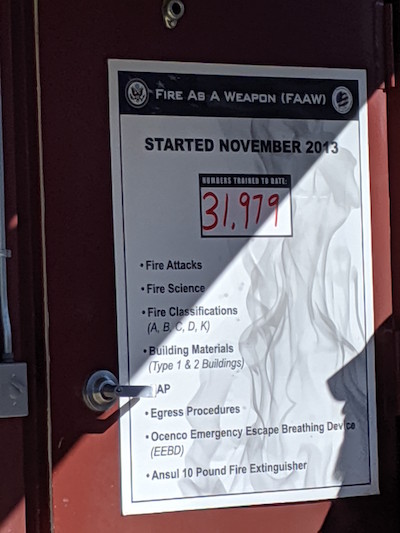 Since 2013, when the program started, 31,979 individuals have been trained, according to a large sign plastered on the exterior of the training structure. Prior to 2013, no program was in place to train foreign officers to deal with this type of situation.

The tracks, according to State Department officials, allow personnel to be trained in a variety of situations such as an attack on a motorcade and learn to navigate tricky terrain, such as inclined steps and rocks.

Around 8,000 to 10,000 Foreign Service officers are trained in various attack scenarios during a 10-hour course.

Near the driving tracks is an almost mile-long group of buildings known as "sim alley." This area serves as a real-life simulation of the types of streets and areas one might experience in conflict zones overseas. It resembles the ramshackle streets found in Iraq and Afghanistan, and is used by officials to train for various sorts of terror attacks, including rocket-propelled grenades and IEDs.

The area sports many large speakers replicating the natural sounds found in these areas and also includes a maze of buildings and side streets that can be used to stage stealth attacks on trainees.

"It's designed to make it as realistic as possible," said one official. "We want them to be sneaky because the bad guys are sneaky."