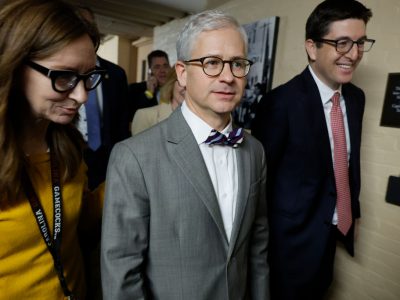 Woke Agenda Survives: These House Republicans Are Sticking With 'Diversity and Inclusion'

House Votes to Prevent Women From Registering for Military Draft

The House of Representatives on Thursday voted in favor of a measure that would preclude women from registering for the military draft, an issue that has been subject to contentious debate since the Pentagon opened up all combat roles to women this year.

House lawmakers approved an amendment offered by Rep. Warren Davidson (R., Ohio), an Army veteran, to a government spending bill that would prevent appropriated funds from being used to change the Selective Service registration requirements. The amendment passed in a vote of 217 to 203 on Thursday evening.

The vote marked the first time that the full House has directly voted on the issue. Following Defense Secretary Ash Carter’s announcement last December that all combat roles would be opened to women, some lawmakers have argued that women should also be required to sign up for the draft. Only American men between the ages of 18 and 26 are currently required to register for the Selective Service.

The issue is poised to create a wedge between the Senate and House as they soon go to conference to debate the fiscal year 2017 National Defense Authorization Act (NDAA). While the Senate approved a version of the annual defense legislation that would require women to register for the draft, the House’s own bill does not include such language.

Democrats, including presumptive presidential nominee Hillary Clinton, have largely supported requiring women to sign up for the draft, but the issue has divided Republicans.

'I think it’s a reasonable question whether we should require women to sign up for it and potentially be put in roles like infantry against their wishes. It’s one thing for our military to say we’re going to open these roles to women, it’s another thing to say women may be required to serve [in those roles]," Sen. Tom Cotton (R., Ark.) said at a Heritage Foundation meeting with reporters last month. Cotton supported an amendment to the NDAA removing the provision and requiring the Pentagon to study the Selective Service System. The amendment was never adopted, and Cotton ultimately voted in favor of the legislation.

But some Republican senators voted against the NDAA because of the language mandating that women sign up for the Selective Service.

'Despite the many laudable objectives in this bill, I could not in good conscience vote to draft our daughters into the military, sending them off to war and forcing them into combat," Sen. Ted Cruz (R., Texas) said in a statement at the time.

The House Armed Services Committee initially approved a version of the annual defense legislation that included language requiring women to sign up for the draft, but the provision was eventually stripped by the Rules Committee in an effort to prevent a 'reckless policy" from being implemented without proper oversight.

American women narrowly oppose a requirement for women to register for the draft, according to a YouGov poll released in June.

Woke Agenda Survives: These House Republicans Are Sticking With 'Diversity and Inclusion'