China’s growing space warfare capabilities are prompting the Air Force to develop military space weapons to protect U.S. satellites and shoot down enemy systems, the commander of the Air Force Space Command said in an interview that aired on Sunday.

"And if we’re threatened in space, we have the right of self defense and we’ll make sure we can execute that right."

Asked if those defenses will involve military force, Hyten states: "That’s why we have a military … I’m not NASA."

Hyten said some U.S. military satellites can maneuver to avoid attack but older ones cannot. "It depends on the satellite … when it was built … how old it is … when we know the threat is coming."

The program reports that the United States has tested anti-satellite weapons in the past and spends an estimated 10 times more on space than the Chinese. The military space budget is around $25 billion annually, including spy satellites and secret programs, CBS reported.

Hyten’s complete remarks on the Chinese space threat and the U.S. response were aired Sunday on 60 Minutes.

"It was a significant wakeup call to our entire military," Hyten said. "Until that singular event, I don't think the broader military realized that that is something we're going to have to worry about."

China is continuing to conduct anti-satellite weapons tests, he added, "to make sure that if they ever got into a conflict with us or any other space-faring nation, they would have the ability to destroy satellites."

Hyten said U.S. space weapons programs are designed not to create dangerous debris. Instead, the military is working on counter-communications capabilities that can cut links between ground control and space systems.

Asked if maneuvering satellites and jamming are the only space arms being worked on, Hyten said: "That's not it, but that's all I can tell you."

Another system that is part of the U.S. space arsenal is the X-37B spacecraft that can orbit for long periods of time and then return to earth.

Weeden said China conducted a test of a high-earth orbit anti-satellite missile that may have traveled some 18,600 miles into space, threatening strategic geosynchronous orbiting satellites systems.

The test was first reported by the Free Beacon.

"If those satellites are now at risk, that is something that, from the U.S. military's point of view, is new," Weeden said. "Because it's always believed those satellites, there wasn't really a significant threat to those capabilities."

Hyten declined to specify how high China’s May 2013 anti-satellite test traveled but said it was "pretty high."

"I won't characterize the Chinese capabilities are," he said. "I just will tell you that we know what they are."

The program will also reveal one of the Air Force’s new systems for space warfare, a high-technology laser-guided telescope.

The telescope located in Albuquerque, N.M., is used by the Air Force to track satellites as part of what the service calls "space situational awareness," or intelligence on threats in space. 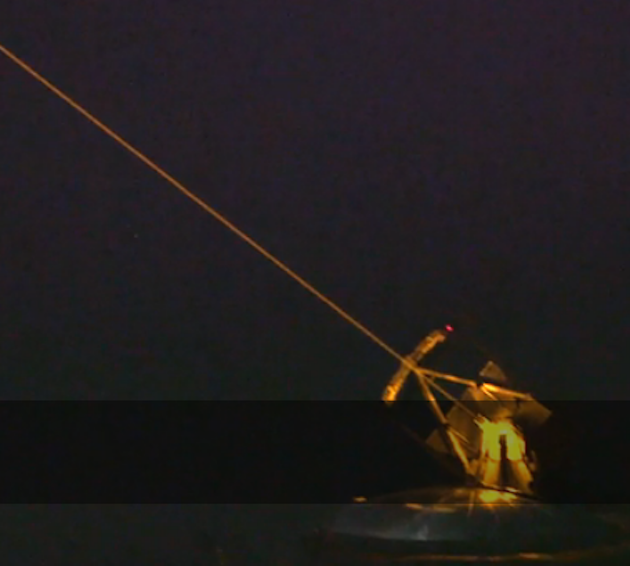 Screenshot of the Air Force laser-guided telescope from '60 Minutes'

The general’s comments that China soon will be able to attack all orbits echoed an earlier warning to Congress last month from military officials.

"Now we have to figure out how to defend those satellites, and we're going to," Hyten says.

Russia last year launched three communications satellites and shortly after the launch, Air Force space watchers detected what were thought to be small debris pieces near the satellites that suspiciously began maneuvering.

"I'm not going to speculate," Air Force Lt. Gen. John "Jay" Raymond, commander of the Joint Functional Component Command for Space said. "But I can tell you what it isn't. It's not a piece of debris."

The operation is known by the military as a rendezvous and proximity operation, something that can have both civilian space repair and military destruction capabilities.

"We are quickly approaching the point where every satellite in every orbit can be threatened," Raymond told the House Armed Services subcommittee on strategic forces March 26.

The threat is not new. A major U.S. military exercise held more than 10 years ago began with a simulated salvo of 20 Chinese anti-satellite missiles that knocked out strategic U.S. military communications, navigation, and targeting satellites, crippling U.S. warfighting capabilities.

Loverro also stated that the United States is preparing to defend space systems from attack.

The House testimony came as the Pentagon plans to spend an additional $5 billion over five years to strengthen space defenses.

Hyten, the leader of Space Command, said current defenses consist of tracking space objects that move unexpectedly and then preparing to take action.

"Due to its dominant position, a ‘concomitant satellite’ not only can suppress and relay GPS signals coming down from the satellite and thus produce jamming and deceptive effects, but it also can, when necessary, deliver hard destruction of the accompanied satellite, thereby destroying the enemy's information transmission once and for all," the book states, adding that such systems "will be playing a tremendous role in future wars."

The satellites will also be able to perform "the functions of surveillance, electronic reconnaissance and deception, electronic jamming, and information assault, or even to take over the targeted satellites," the book states.