Former Navy SEAL Jimmy Hatch stood over the garbage cans in the backyard of his Norfolk, Va., home as he held a loaded pistol in his mouth, a trigger pull away from killing himself 11 months after suffering career-ending injuries while searching for Army Pvt. Bowe Bergdahl in July 2009.

Haunted by the failed mission to retrieve Bergdahl in eastern Afghanistan, where Hatch's right femur was shattered in the same barrage of Taliban gunfire that killed military service dog, Remco, he was prepared to take his life.

But his wife, Kelley, intervened, grabbing the gun from him and later knocking a knife out of his hand before the police and members from his SEAL Team 6 unit arrived to take him to the hospital for mental health treatment. The episode marked the beginning of a years-long recovery that forced Hatch to take on the memories that tormented him.

In his newly released book, Touching the Dragon and Other Techniques for Surviving Life's Wars, Hatch said he hopes to elevate the conversation on mental health and to illuminate the realities of close-quarters combat, which he said is too often portrayed as an individualistic, "chest thumping" experience. 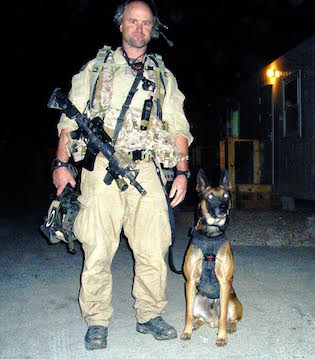 "It's important to understand that the military is very different from the rest of our culture in that we are super interconnected," Hatch told the Washington Free Beacon. "But I think we could be an example to demonstrate, look, there are people who have troubles, and when they make decisions it has a big effect on a lot of people."

Though Hatch meticulously details the night his military career ended when a bullet ripped through his leg as he was trying to rescue Bergdahl from Taliban militants, he focuses much of the book on his years-long struggle with depression, alcoholism, suicidal thoughts, and physical recovery after returning home to the United States.

"If someone is hit by a bus and is laying on the side of the road, people would run up and try to help him," Hatch said. "If somebody is hit by a bus in an emotional way, people kind of stand back and it's uncomfortable. We should look at health across the board equally."

Hatch made headlines in October when he testified during the sentencing phase of Bergdahl's court-martial, breaking down into tears as he described watching a militant shoot Remco in the head from inches away.

Bergdahl received a dishonorable discharge from the U.S. Army, but avoided prison time for desertion, misbehavior before the enemy, and endangering troops eight years after abandoning his outpost in Afghanistan before the Taliban held him captive for five years.

The book details the resentment Hatch held against Bergdahl in the years that followed his unit's rescue attempt. He spoke of the overwhelming anger he felt in 2014 while watching Bergdahl's parents celebrate his release in the White House Rose Garden with then-President Barack Obama, who freed five high-level Taliban prisoners held at Guantanamo Bay in exchange for Bergdahl.

"I was at an event that day with some other wounded veterans, one of whom had been blown up and didn't have any legs, and I said, ‘Hey man, did your parents get to go to the Rose Garden and get hugs from the president?'" Hatch recalled.

Hatch said while he was frustrated by the outcome of Bergdahl's court-martial, he has decided to move on.

"It was tough, but the truth is people saved my life, risked theirs to save mine, and because of that I can't be angry," he said "It would be a waste and it would be disrespectful to the people that expended themselves on my behalf to spend my life locked in that anger and hurt."

Hatch, who earned four Bronze Stars and a Purple Heart among other honors over the course of his 25-year military career, has devoted his life to helping service dogs. His nonprofit, Spike's K9 Fund, works to provide bulletproof vests, medical care, and other services to working dogs. The group is named after his first military dog, Spike, who was fatally shot in Iraq.

Hatch will be in Washington, D.C., on Thursday, May 17, at 7 p.m. ETC to discuss his new book alongside co-author Christian D'Andrea.

Taliban Seeks To Cash In on Afghanistan’s Uranium Stash