Dempsey: ‘The Global Security Environment Is As Uncertain As I’ve Ever Seen It’

Chairman of the Joint Chiefs of Staff Gen. Martin Dempsey testified Tuesday that he has never seen a more precarious global security environment than the one United States faces today.

"I've said before that the global security environment is as uncertain as I've ever seen it," Dempsey told the Senate Armed Services Committee. "The world is rapidly changing everywhere, and we're seeing significant shifts in an already complex strategic landscape."

Dempsey made this admission during testimony about the United States' war of attrition against the Islamic State (IS, also known as ISIS or ISIL), but the security threats he described spanned the globe.

"ISIL is one of many concerns," Dempsey said. "As the chairman mentioned we're contending with Russia's revanchism in Ukraine, China's operations in the South China Sea, Iran's malign activities in the Middle East, technical advancements by North Korea, rising aggression of non-state networks, and a rapidly leveling playing field in cyber and in space."

Dempsey said these challenges, taken together, contribute to a "uniquely complicated" threat environment.

"What makes this uniquely complicated is that these trends are manifesting themselves simultaneously," Dempsey said.

"While our potential adversaries grow stronger, many of our allies are becoming increasingly dependent on the United States and our assistance," Dempsey said. "Some of our comparative military advantages have begun to erode."

While he did not single Iraq out by name, Dempsey implied that the central government there was in a particularly concerning state of disarray.

"Several governments are struggling to gain political legitimacy because they're not sufficiently pluralistic or they're not sufficiently accountable to their citizens," Dempsey said. "Second, the centuries old Sunni-Shia struggle is very evident. Weak states are less able to assert independence amid the tug of war between sectarian regional powers."

The Shia-dominated government in Baghdad has failed to gain the trust of Sunni areas where it is fighting IS terrorists. Making matters worse, the central government has proved open to influence from the Shia power of Iran.

Despite his vivid description of the failure of the Iraqi government, Dempsey defended the current U.S. policy of relying on that government to roll back the Islamic State, a policy some commentators say is futile.

Dempsey maintained U.S. involvement in the Middle East is "appropriately matched to the complexity of the environment."

"Military power alone, as we said, will not solve ISIL," Dempsey said, repeating a variation of a controversial line spoken by President Obama on Monday. "This campaign focuses on actively reinforcing and hardening our partners in the region who must, and in most cases are, taking responsibility for their own security."

The Obama administration has gradually escalated U.S. involvement in Iraq in the face of IS advances, but it has shrunk from committing U.S. troops to combat roles and directly assisting effective partners like the Kurds. 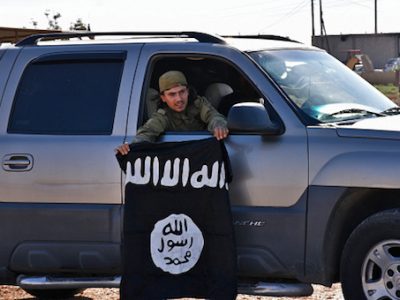