The test of the new hypersonic glide vehicle was carried out Jan. 9 and the experimental weapon is being dubbed the WU-14 by the Pentagon, said officials who spoke on condition of anonymity.

The new hypersonic vehicle was detected traveling at extremely high speeds during the flight test over China, said officials who discussed some details of the test.

The hypersonic craft appears designed to be launched atop one of China’s intercontinental ballistic missiles, and then glides and maneuvers at speeds of up to 10 times the speed of sound from near space en route to its target, the officials said.

A Pentagon spokesman confirmed the test but declined to provide details.

"We routinely monitor foreign defense activities and we are aware of this test," Marine Corps Lt. Col. Jeffrey Pool, the spokesman, told the Washington Free Beacon.

"However, we don't comment on our intelligence or assessments of foreign weapon systems," Pool said in a statement. "We encourage greater transparency [by the People’s Republic of China] regarding their defense investments and objectives to avoid miscalculation," he added.

The United States, Russia, and China are all engaged in a hypersonic arms race. All three nations are developing high-speed aerospace vehicles. India is also developing a hypersonic variant of its BrahMos cruise missile.

Hypersonic weapons use cutting edge technology for flying and maneuvering at ultra-high speeds in space and air. Future weapons will include powered and unpowered hypersonic vehicles fired from the last stages of ICBMs and submarine missiles, and from the bomb-bays of strategic bombers. Hypersonic cruise missiles and surveillance drones also are expected.

The military advantages of hypersonic craft include precise targeting, very rapid delivery of weapons, and greater survivability against missile and space defenses.

China is also developing a hypersonic, scramjet-powered vehicle that can take off independently or be launched from a bomber.

The hypersonic glide vehicle is likely missile-launched after the rocket’s initial boost phase that then takes off toward its target from near space, or less than 62 miles from earth, Stokes said.

"A boost glide missile theoretically would be intended to counter existing mid-course missile defenses," he said, noting that Chinese technical studies have shown the vehicle would use penetrating radar for its high-altitude targeting.

The vehicle is part of China’s aerospace weaponry designed to blend the characteristics of space-transiting ballistic missiles with ground-hugging cruise missiles, Stokes said.

"Hypersonic aerospace flight vehicles exemplify the merging of the air and space domains from both operational and industrial perspectives," Stokes said.

Stokes, an analyst with the Project 2049 Institute, said Chinese military reports indicate that its hypersonic glide vehicles will travel from the edge of space at speeds ranging between Mach 8 and Mach 12, or between 6,084 miles per hour and 9,127 miles per hour.

Such speeds would challenge the current system of U.S. missile defenses. Those defenses include a combination of long-range interceptors, medium-range sea and land-based interceptors, and interceptors designed to hit incoming missiles closer to targets.

Lora Saalman, a specialist on Chinese strategic systems with the Carnegie Endowment, said China’s hypersonic arms are part of a program to develop precision-guided missiles and other advanced weapons capabilities.

Saalman, who spent years in China studying Chinese military and other writings, said writings on Chinese hypersonic arms indicate Beijing may be seeking high-speed weapons that are more limited in range and conventionally armed, although with strategic nuclear potential.

The U.S. Prompt Global Strike program seeks hypersonic and other conventional and nuclear weapons capable of attacking any location on earth within an hour. Elements of the U.S. system are expected to be fielded in the next 10 to 15 years.

China’s hypersonic capabilities also appear to be an outgrowth of precision strike missiles, like the DF-21D anti-ship ballistic missile, and China’s own version of missile defenses, which use high-speed hit-to-kill capabilities, Saalman said, noting that China has been streamlining its weapons development process.

"With the integration of strategic analysis and planning into technical research, China’s pursuit of hypersonic and high-precision weaponry promises to be faster and more focused than that associated with its previous [anti-satellite] and [ballistic missile defense] related research and programs," Saalman said in an email. "This recent test is a manifestation of this trend."

Hypersonics and precision guidance "are growth areas within China in terms of what they are intending to do with their military," she said in a recent speech.

"The beauty of the HGV is that it can perform hypersonic precision strikes while maintaining a relatively low altitude and flat trajectory, making it far less vulnerable to missile defenses," said Fisher, an analyst at the International Assessment and Strategy Center.

Fisher said arms control advocates often view the U.S. Prompt Global Strike and similar Chinese hypersonic weapons as part of an isolated competition caused by misperceptions that can be resolved through arms talks.

"I'm not against that, but the lessons of recent history are pretty stark: a paranoid Communist dictatorship is going to seek maximum power to sustain its position no matter how friendly you try to treat it," Fisher said.

Fisher said that in addition to China’s hypersonic weapons and other weaponry similar to the arms in the U.S. Prompt Global Strike program, China is also building its strategic military capabilities to support its global power projection.

The Chinese are "actively seeking global military power to challenge the United States, and it is not yet in any mood to talk, or engage in arms control, about it," he said.

Instead of seeking military and other hot line communications, the U.S. government should build on select military superiorities in order to deter China into the 2020s and beyond, Fisher said. "I don't see this administration being seized with this real challenge," he added.

The Pentagon’s most recent annual report on the Chinese military said that in May 2012 China opened a new JF12 shockwave hypersonic wind tunnel—the largest of its kind in the world—that replicates flying conditions between Mach 5 and Mach 9.

A Chinese technical paper from December 2012 revealed that China plans to use on-board precision guidance systems that would be corrected in-flight using both satellite and celestial navigation.

"Hypersonic aircraft in aerospace usually have the following unique characteristics: high, fast, and small," the paper states. "Their motion is highly variable. As a result, this type of target is very difficult to track."

Both the United States and Russia are also developing hypersonic weapons.

Current U.S. hypersonic research is being carried out by the Pentagon and Air Force through the Force Application and Launch from Continental United States, known as the FALCON program.

Several vehicles are being studied, including the Lockheed HTV-2 or Hypersonic Technology Vehicle, an unmanned, missile-launched maneuverable aircraft that glides to earth at speeds up to Mach 20, or 13,000 miles per hour.

Boeing is also working on the X-51 WaveRider, an aircraft-launched, scramjet-powered vehicle that is being designed for hypersonic attack, reconnaissance, and commercial transport. 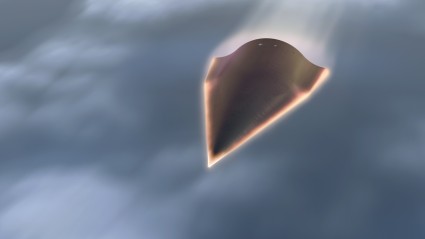 Another vehicle is the U.S. Air Force experimental X-37B Space Plane that has been orbiting earth since December 2012.

Russia also is making advances in hypersonic weaponry, including technologies for both offensive high-speed attacks and defending against hypersonic strikes.

The Air Force National Air and Space Intelligence Center said in its annual report on missiles last year that Russia is building "a new class of hypersonic vehicle" that would "allow Russian strategic missiles to penetrate missile defense systems."

Russian Deputy Prime Minister Dmitry Rogozin recently compared the development of hypersonic weapons to the emergence of atomic weapons in the 1950s. He said the first nation to master hypersonic weapons would launch a new revolution in military affairs.

Rogozin denied Moscow was engaged in a new arms race with the United States in June. However, he has confirmed that Russia is working on hypersonic weapons.

"Today, we are experiencing a revolution in military science," Rogozin told Russian television June 23. "This revolution is connected with the rapid development of highly accurate means of destruction. These are cruise missiles and high-speed rocket weapons. In the future, there will be hypersonic weapons."

Russia also is developing an air and space defense system called the S-500 with interceptors capable of shooting down hypersonic vehicles.

Ian Easton, in a report published by the Project 2049 Institute, said China’s hypersonic weapons are part of what he called "the Great Game in space."

"If there is a great power war in this century, it will not begin with the sound of explosions on the ground and in the sky, but rather with the bursting of kinetic energy and the flashing of laser light in the silence of outer space," Easton said.