Doubling down on the Trump administration's tough policies toward China, Bolton also renewed criticism of Beijing for meddling in U.S. elections and stealing American technology.

Commenting on the harassment of the guided missile destroyer USS Decatur by Chinese warship that nearly caused a collision in the South China Sea recently, Bolton said the threatening maneuver was unacceptable.

Navy commanders have rules of engagement that allow them to defend their ships, he said.

"The commanders have the authority we need," Bolton said in an interview with radio commentator Hugh Hewitt.

"We will not tolerate threats to American service members. We're determined to keep international sea lanes open. This is something the Chinese need to understand. Their behavior has been unnecessarily provocative for far too long."

The Navy said the Decatur was harassed by a Chinese Luyang-class destroyer on Sept. 30 near one of the Spratly islands. The Chinese ship conducted a series of aggressive maneuvers and sailed within 45 yards of the destroyer, forcing it to change course to avoid a collision. 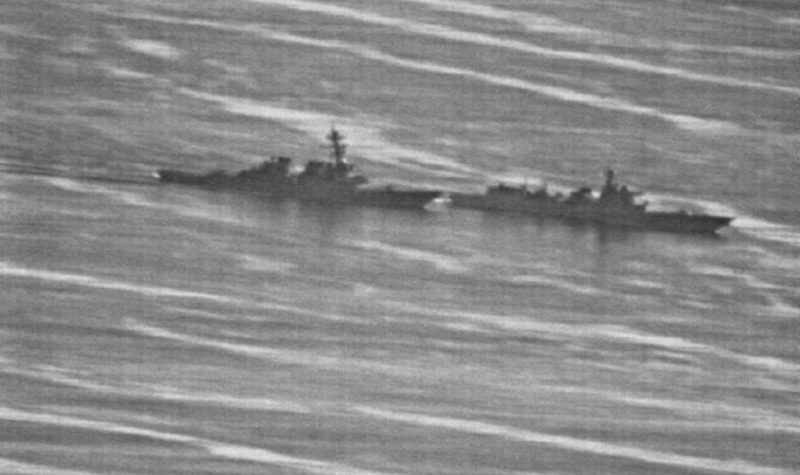 Navy surveillance photo of the encounter

In the South China Sea, China has built up some 3,200 acres of disputed islands and has begun deploying advanced missiles on the islands.

China claims the entire sea, which is used for an estimated $5 trillion annually in shipping trade, is Chinese territory.

The United States insists the waters are international waters. The U.N. Permanent Court of Arbitration rejected Chinese claims to own the sea through a vaguely defined "nine-dash line" extending through most of the waterway.

Bolton was asked if the United States should urge regional allies such as Philippines and Japan to counter the Chinese island-building and militarization by building their own armed islands.

"I think we've got to do more first to establish for the Chinese that we do not acknowledge the legitimacy of any of this," Bolton said.

"The ship near collision you mentioned is an example of how dangerous Chinese behavior is," he added. "We have now got more participation by allies, the British, the Australians, and others, are sailing with us through the South China Sea. We're going to do a lot more on that."

Bolton also said regional allies also could begin to mine undersea energy resources in the South China Sea "with or without Chinese cooperation."

"They need to know they have not achieved a fait accompli here. This is not a Chinese province and will not be," Bolton said.

Bolton said the Chinese were able to get away with aggressive actions against Navy vessels and aircraft during the administration of President Barack Obama.

Chinese threatening behavior is a result of the Obama administration ignoring or mishandling the confrontation.

"The pressure's now on President Trump," Bolton said. "He's responded in a way that has the Chinese confused. They've never seen an American president this tough before. I think their behavior needs to be adjusted in the trade area, in the international, military, and political areas, in a whole range of areas."

Bolton said he is hopeful Xi Jinping will be willing to "talk turkey" in addressing the problems during the upcoming meeting of the G20 group of nations meeting in Argentina set for next month.

"But the president feels very strongly that China's taken advantage of the international order for far too long, not enough Americans have stood up to it. Now's the time to do it," he said.

On Chinese theft of American technology and intellectual property, Bolton said the United States has been "taken to the cleaners for decades" by Beijing.

"Ever since China came into the World Trade Organization, they have pursued a mercantilist economic policy in what should be a free trade environment," he said. "And they've gone well beyond that. They've violated rule after rule after rule."

Those who argued Chinese admission to the World Trade Organization would pressure China into observing international rules and norms of behavior were wrong, he noted.

"They've done the opposite. They've gotten worse. They steal our intellectual property so they're able to compete with us without the investment that's required in research and development. They force technology transfers from American and European companies," Bolton said.

On the issue of whether Russia or China poses the most significant strategic challenge to the United States, Bolton said: "I think we do see China as the major issue of this century."

Trump, based on his business experience, is challenging China on economic ground and Bolton said blocking Chinese theft and acquisition of U.S. know-how would substantially reduce Beijing's military capabilities.

Asked if Google and Facebook should be cooperating with the Chinese in developing information controls, Bolton said Vice President Mike Pence last week urged American tech companies not to cooperate with Chinese repression.

"I would say to shareholders of these companies that portray themselves as the open internet, transparent future, really? You want to make money off of repression? If I were a shareholder, I'd want to know what the answer of our corporate leadership was," Bolton said.

On Chinese election meddling, Bolton said the problem is serious.

"We are very worried about the question of Chinese interference not just in individual elections, but more broadly trying to influence the American political discussion with an influence campaign that I think could well be unprecedented," he said.

Echoing declassified intelligence made public during a speech by Pence, Bolton said the Beijing influence operations must be stopped.

"I think the United States needs to stand up, frankly, to any foreign government that thinks it's going to interfere in our politics," he said. "We are a self-governing people. We will govern ourselves. We don't need international institutions to tell us how to do it. And we particularly don't need foreigners trying to exert undue influence over us."

On the disappearance of Saudi Arabian journalist Jamal Khashoggi, Bolton said he has spoken with Saudi officials and "we just don't know what the facts are."

"The United States does not have information it's not revealing," he said. "If we had information, we'd know better exactly how to handle this. We've made it clear we want to know what the facts are. We're going to continue to do that."

Bolton criticized the Obama administration for its so-called strategic patience policy toward North Korea that allowed Pyongyang to develop nuclear weapons and long-range missiles to deliver them.

The past policy was "a synonym for doing nothing about North Korea."

"I think the combination of the potential use of military force against North Korea and the maximum pressure campaign that the president waged on the economic front is what has brought Kim Jong Un to the table," he said, adding that Trump could meet Kim Jong Un for a second time in the next couple of months.