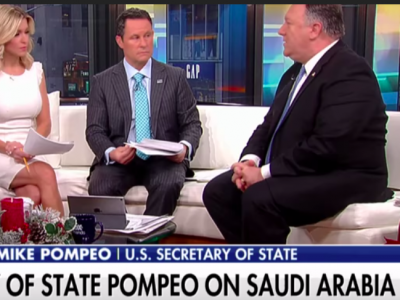 A new organization intended to carry out the vision of late Saudi dissident Jamal Khashoggi is led and staffed by prominent anti-Israel activists, including a controversial lawyer who defended a dozen people allegedly involved in the 9/11 terror attacks.

Democracy for the Arab World Now (DAWN) bills itself as a new human rights group that seeks to "focus on violations by the United States’ closest Arab allies," according to a New York Times report this week on the group’s foundation. Khashoggi was reportedly working to launch the organization when he was killed in Saudi Arabia in 2018.

While the group positions itself as a pro-democracy watchdog, its leadership is comprised of controversial anti-Israel voices who have targeted the Jewish state. The group’s executive director, Sarah Leah Whitson, is a well-known Israel critic who most recently served as managing director for research and policy at the Quincy Institute for Responsible Statecraft, an isolationist think tank that has pushed anti-Israel and pro-Iran viewpoints.

Whitson attracted widespread criticism in March when she likened Israel’s tough coronavirus quarantine measures to the plight of Palestinians living in the disputed territories. "Such a tiny taste. Missing a tablespoon of blood," Whitson wrote in a tweet that she later deleted after it prompted accusations of anti-Semitism.

DAWN’s board of directors includes the founder of the Council on American-Islamic Relations (CAIR), an anti-Israel group that was embroiled in an FBI probe into whether it was funneling cash to the terror group Hamas. Another board member served as legal counsel for Sudan when it was taken to court for alleged involvement in the 9/11 terror attacks.

DAWN’s leaders say the organization is meant to boost Khashoggi’s vision for democracy across the Middle East. He reportedly seeded the idea in 2017, after he fled Saudi Arabia and relocated to Washington, D.C., where he became a frequent critic of Saudi leadership.

"The fundamental premise that democracy and human rights are the only solution for stability, security and dignity in the Middle East is 100 percent Jamal’s point of view," Whitson said in an interview with the New York Times. "That is what he wanted this organization to be about."

Among those serving on the organization’s board of directors is Asim Ghafoor, a prominent national security lawyer who has represented the Sudanese government against American victims in litigation stemming from the 9/11 terror attacks, the bombing of the U.S. embassy in Sudan, and the bombing of the U.S.S. Cole.

CAIR’s cofounder Nihad Awad is also a DAWN board member. Prior to joining CAIR, Awad served as the public relations director for the now-defunct Islamic Association for Palestine, a group "described by the U.S. government as part of ‘Hamas’ propaganda apparatus,’" according to information from the Anti-Defamation League (ADL), which combats anti-Semitism.

CAIR’s leadership has been embroiled in controversy over its connections to the terror group Hamas. The ADL, which offers muted praise for the group’s work, has warned that "at times the organization’s positions and work have been shadowed by early connections between some of CAIR’s top leadership and organizations that are or were affiliated with Hamas" and that "antipathy towards Israel has been a CAIR staple since the group was founded."

Awad was an early supporter of Hamas, stating in 1994: "After I researched the situation inside Palestine and outside, I am in support of the Hamas movement more than the PLO." Asked by Al Jazeera in 2000 if he would condemn Hamas, Awad stated, "We do not condemn, and we will not condemn any liberation movement inside Palestine or inside Lebanon."

Prior to joining Dawn, Whitson spent a short time at the Quincy Institute, which is funded by billionaires Charles Koch and George Soros. Her anti-Israel Twitter outburst contributed to allegations that Quincy was founded to push anti-Israel causes and attack the Jewish state.

Whitson also worked at Human Rights Watch, another advocacy group that has spent years criticizing the Israeli government and its policies in the West Bank area. She made headlines during her time there for attempting to raise money in Saudi Arabia by highlighting the group’s anti-Israel work.