The managing director for research and policy of the Quincy Institute for Responsible Statecraft appeared to celebrate the draconian measures employed by the Israeli government to stop the spread of the coronavirus. Then she argued that whatever discomforts they impose on Israeli citizens, they are not enough to compensate for the suffering Israel has inflicted on its Palestinian neighbors.

"Such a tiny taste. Missing a tablespoon of blood," Sarah Leah Whitson wrote in a now-deleted tweet.

Whitson was responding to a tweet from the Israeli-American journalist Mairav Zonszein, who wrote, "6 million Jewish Israelis will now get a taste of what around the same number of Palestinians living under occupation have experienced for over half a century." Zonszein was referring to the tactics now being embraced by the Israeli government to reduce transmission of the coronavirus, including antiterrorism measures like cell phone tracking of infected individuals. 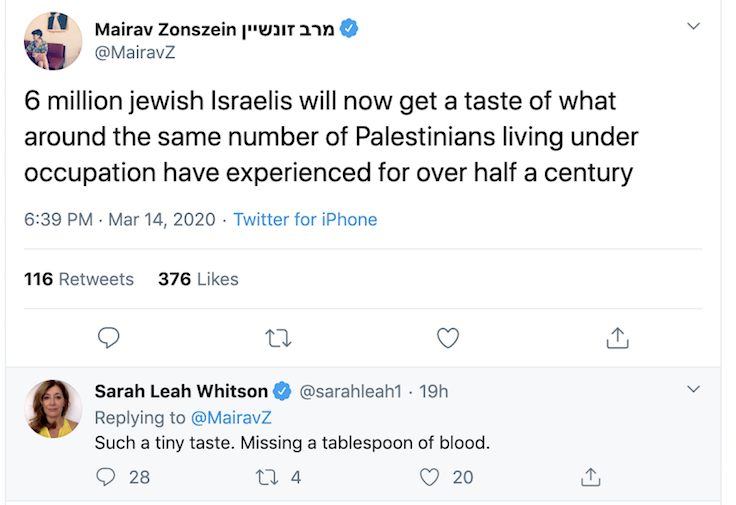 Neither Whitson nor the Quincy Institute replied to a request for comment. The Israeli government took drastic action over the weekend, including the closings of restaurants, bars, and gyms. Whitson appeared to be expressing frustration that the measures would not offset the violence perpetrated by the Israeli government on the Palestinians.

"It is stunningly revolting," said Deborah Lipstadt, a scholar of modern Judaism and anti-Semitism at Emory University and the author of a modern history of anti-Semitism.

After facing a flood of criticism on Twitter—as well as inquiries from the Washington Free Beacon—Whitson deleted her tweet and posted a follow up arguing that her previous tweet "didn't come out right" and that she had deleted it "to prevent misinterpretation." She made no reference to the possibility that she had hurt or offended Jews.

"Erased tweet responding to one comparing experience of Israelis under lockdown to Palestinians under decades of lockdown," Whitson tweeted Sunday evening. "My point was that [Palestinian] experience includes violence. Should've emphasized I abhor all violence. Didn't come out right so now gone to prevent misinterpretation."

Erased tweet responding to one comparing experience of Israelis under lockdown to Palestinians under decades of lockdown. My point was that Pal experience includes violence. Should've emphasized I abhor all violence. Didn't come out right so now gone to prevent misinterpretation.

The Quincy Institute, which is supported by Charles Koch and George Soros, launched late last year with the stated goal of promoting a more restrained and less interventionist U.S. foreign policy.

But the organization has been dogged by accusations of anti-Semitism and has refused to answer questions about why some of its experts have attacked a so-called Jewish lobby and argued that American Jews control U.S. foreign policy.

Whitson herself has a lengthy history of anti-Israel activism. Most notably, she made headlines as a director at Human Rights Watch when she traveled to Saudi Arabia for meetings with government officials to raise money for the organization by promoting its criticism of Israel.

In February 2019, she accused Israel of interfering in British politics, a claim that has historically been used to paint Jews as part of a nefarious global plot.

In 2017, NGO Monitor, a group that monitors anti-Israel figures, criticized Whitson for promoting falsehoods against the Jewish state.

"Sarah Leah Whitson, director of HRW's Middle East and North Africa Division, attacks Israel with a stream of false claims and demonization," the group said at the time. "According to Whitson, ‘Israel claims to treat Jerusalem as a unified city, but the reality is effectively one set of rules for Jews and another for Palestinians.'"

"The deliberate use of ‘Jews' in place of ‘Israelis' by Whitson and HRW is also offensive, if not anti-Semitic," NGO Monitor said. "Again, it allows HRW to accuse Israel of ‘discrimination' and a ‘two-tiered system,' instead of acknowledging obvious and reasonable differences … in the legal status of citizens, permanent residents, and foreigners."