New legislation circulating in Congress would pour tens of billions of dollars into American research and development, in a move that one Republican sponsor characterized as critical to a new "Cold War" against China.

The Endless Frontiers Act would radically overhaul the National Science Foundation, giving it $100 billion over five years to fund innovation in high-tech fields including artificial intelligence, quantum computing, and cutting-edge engineering. That would undo decades of declining federal R&D spending which has been dropping since the fall of the Soviet Union.

Doing so, bill cosponsor Rep. Mike Gallagher (R., Wis.) told the Washington Free Beacon in an interview, is not just about increasing domestic investment—it's about ensuring that the next generation of world-shaping technology is made in America, not China.

"In my view, playing defense is not enough to ensure that America remains the world's preeminent leader in science and technology, and that the U.S. and not the CCP invents the critical technology standards of the future," Gallagher said. "So just as we did at the beginning of the Cold War, in this new Cold War we have to substantially increase the federal investment that's critical for our strategic competition and national survival."

The bill—introduced by Gallagher, Sen. Todd Young (R., Ind.), and Democratic counterparts Sen. Chuck Schumer (N.Y.) and Rep. Ro Khanna (Calif.)—has attracted excitement among former NSF officials and university administrators. Schumer's support may help move the idea from proposal to the floor of Congress, although some are likely to blanch at the price tag amid a soaring budget deficit.

The bill's bipartisan basis does, however, signal the growing resolve on both sides of the aisle to not only counter China, but take aggressive steps to curb its bid for global hegemony—a stance for which voters are increasingly agitating.

A further $10 billion would go toward the Department of Commerce to fund regional technology hubs, helping to spread the benefits outside of the major centers of private R&D like California and New York.

That money would represent a boost to federal research and development spending, which has declined on and off for decades. Just 9.7 percent of discretionary dollars were earmarked for R&D in FY 2020, according to the American Association for the Advancement of Science. That's down substantially from the peak of almost 18 percent in 1965, the height of the space race. 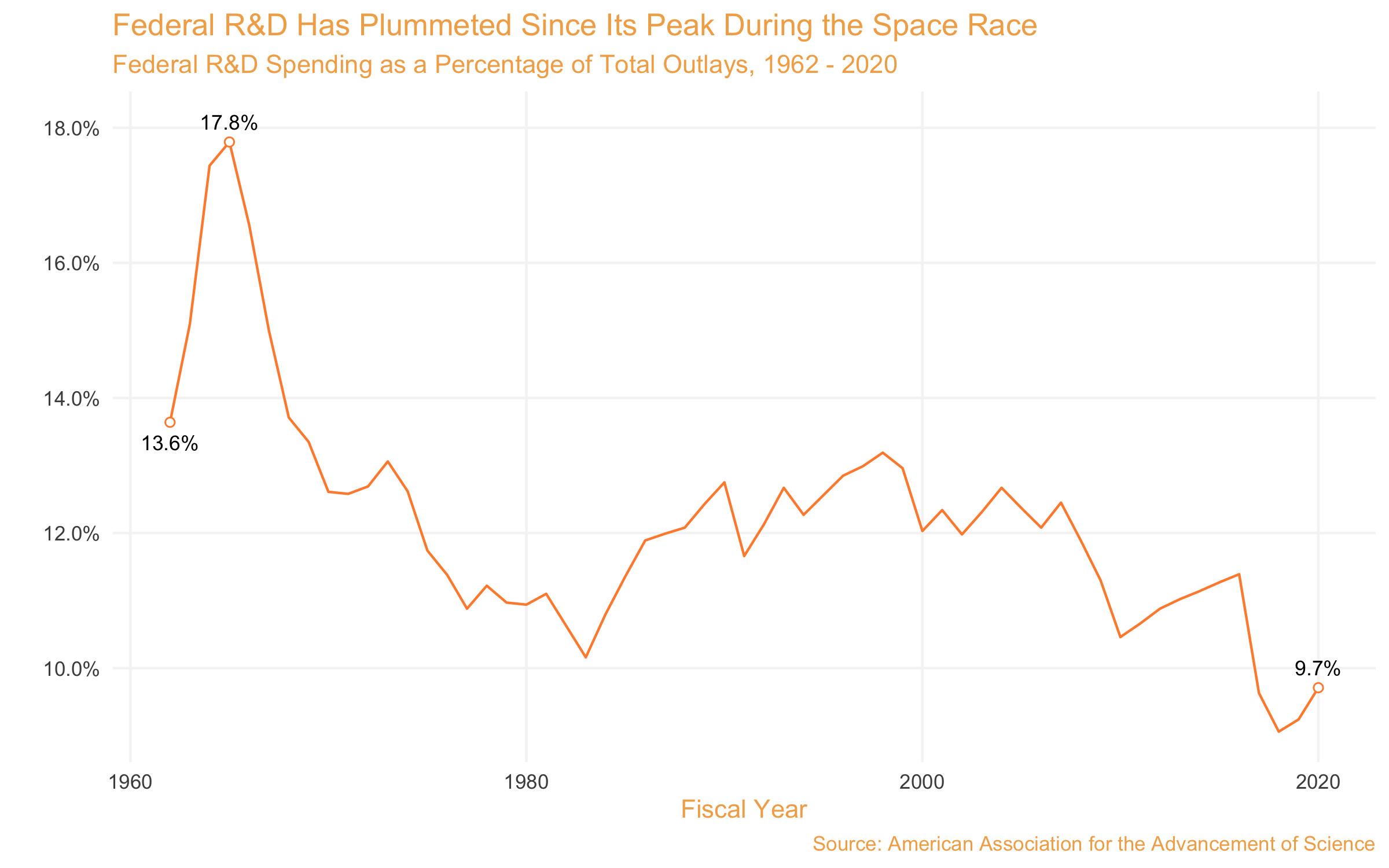 Samuel Hammond, a policy expert at the Niskanen Center who has worked extensively on innovation, told the Free Beacon that R&D spending began waning as the Soviet Union imploded.

"The threat of being overtaken by a geopolitical adversary is a great motivator for investments in science and technology," Hammond said. "While the CCP does not have the same imperial ambitions as the Soviet Union, they do see China becoming a global superpower, and are intent on reshaping the world order. That has reawakened lawmakers to the importance of innovation policy."

While U.S. investment has flagged, China has moved aggressively, spending big to move from simple manufacturing to complex technological innovation. The CCP's "Made in China 2025" plan aims to make China a "global powerhouse" in high-tech industries such as robotics, aviation, and information technology.

There is an "almost total overlap," Gallagher said, between the 10 investment targets in Endless Frontiers and the focuses that appear in "Made in China 2025." He and his fellow sponsors are concerned about the prospect of America losing the technological upper hand.

"We don't realize the power it would give them to be able to flip the export control script on its head and use it against us," Gallagher said. "Imagine a world in which there are no Huawei competitors come 2025 when it comes to 5G, 6G, or wherever we are at that point."

Although Gallagher seems particularly gung-ho about a standoff with China, the bill's bipartisan support sends a signal about the broader attitude in Congress. Particularly of note is the backing of Schumer, the Senate minority leader, who is often hostile to Republican initiatives but whom GOP colleagues have called strong on China.

That makes Endless Frontiers part of the broader thirst for anti-China moves in Congress at large. Both chambers, for example, were nearly unanimous in their support for the Uyghur Human Rights Policy Act of 2020, which compels the president to sanction Chinese leaders for the abuse and detention of China's Uyghur Muslim population. That legislative push in turn reflects the growing hostility toward China among both Democratic and Republican voters.

Americans, Gallagher argued, need to move from seeing China as a bad actor to seeing it as a new Soviet Union, to be countered in the same manner.

"We could do a lot worse than following Reagan's strategy for how the Cold War ended, which is: We win, they lose," Gallagher said. "And if we don't think that way, we are far more likely to bumble our way into the Chinese end state, which is: They win and we die."