Women in Colorado can get an abortion at any point during their pregnancy, but don't post about it on Facebook, which censored at least two posts criticizing the law.

Facebook censored posts last week from Republican politicians Ben Carson and Nikki Haley that criticize a Colorado bill signed by Democratic governor Jared Polis that recognizes a right to abortion on demand. The posts both shared a screenshot of a tweet from Lila Rose, president of the pro-life organization Live Action, that stated the law legalizes abortion up until birth.

Facebook cited an article from PolitiFact, which is on the social media giant's independent fact-check team, to justify its action. The fact check claims Rose's statement is false because women in Colorado could already get late term abortions before the bill established it as a right and because late-term abortions are rare.

"Colorado's new law codifies existing protections around an individual's right to use or refuse contraceptives, continue with a pregnancy and give birth, or to have an abortion," PolitiFact reporter Sara Swann wrote. "Abortions that occur later in a pregnancy—at 21 weeks gestation or later—are rare. We rate this claim False." 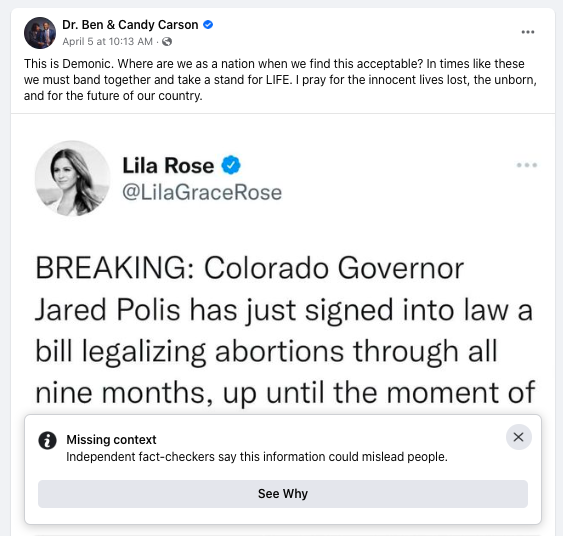 Colorado's abortion data show that in 2020 there were 217 abortions performed between 22 and 24 weeks of pregnancy and 6 performed after 28 weeks.

The censorship by Facebook is the latest example of how biased fact-check organizations coordinate with social media companies to censor content that may hurt liberal political causes. Facebook in February similarly censored a Washington Free Beacon story on the Biden administration's plan to fund the distribution of crack pipes based on a fact checker's claim that the story was "mostly false." The fact checker gave no evidence to support its claim.

"It's pathetic these ‘fact checkers' are twisting the truth when it comes to such an important issue," Haley told the Free Beacon.

Democratic-controlled state legislatures in Vermont and New Jersey this year recognized abortion on demand as a right, joining more than a dozen states that have similar measures. The Supreme Court this spring will decide the fate of Roe v. Wade in a case on Mississippi's 15-week abortion ban.

Colorado's latest abortion law omits the term "woman" and instead recognizes a right to abortion on demand for a "pregnant person."

Update 2:53 p.m.: This piece has been updated with additional information.