"Taylor Lorenz spends most of her days reporting on the ways we use the internet. Here's how she does it," reads the tagline to a Times interview published on Thursday. Lorenz explains that her goal in covering teens on the internet is convincing people "that influencing and creating things online is a valid career and should be taken seriously." That explains her abiding interest in TikTok celebs. Though maybe not her recent obsession with the social media habits of Kellyanne Conway's teenaged daughter.

That wasn't even the first piece the Times published about its star employee. The subhead for a nearly identical article published in December 2019 reads: "Taylor Lorenz, who writes about internet culture, explains how she keeps her finger on the pulse." In that article, Lorenz discussed her recent reporting on "how pineapples became a meme in the world of in vitro fertilization" and her purchase of a Tamagotchi.

Granted, there are few things journalists enjoy more than fawning over fellow journalists, but this situation is out of control. Professional journalists, traditionally loath to be the subject of a story, have been interviewing Lorenz since as far back as 2014 when Politico interviewed her about her role as social media director for the Daily Mail.

On Thursday, the Los Angeles Times published an entire article about Lorenz asking a question about L.A. neighborhoods on Twitter.

Lorenz was also the subject of a Digiday profile published in March, in which she describes how being a female reporter makes it easier to randomly message teenagers without coming across as a creep. She also discusses some of her "self-care" habits, such as watching a horror movie "almost every night." Just days earlier, Lorenz's Brooklyn apartment was featured on Apartment Therapy, a lifestyle blog. (She has a wall-mounted projector and a brick fireplace filled with books.)

Earlier this year, she was interviewed by the Caret, a weekly newsletter dedicated to "innovators and visionaries shaping the digital landscape." Lorenz discussed how she first developed an interest in online culture in high school when she would casually "lurk" on strangers by looking at party photos posted on the internet. "There were these girls from Hollins College that would post and I can tell you every single social dynamic in that group even though they never knew who I was," she said. "I followed them for years."

In 2019, Lorenz was on the cover of Meme Insider, the "leading internet trends magazine." She was also a featured speaker at the Aspen Ideas Festival, VidCon, and the Online Marketing Rockstars Festival in Hamburg, Germany, where conference planners "put images of speaker Taylor Lorenz's face on coffee cups, pillows, and water bottles—and even put her name on a car."

Not all the coverage of Lorenz has been so fawning. The reporter was widely mocked in 2018 after she tweeted her disappointment about the $22 avocado toast she ordered on Seamless. 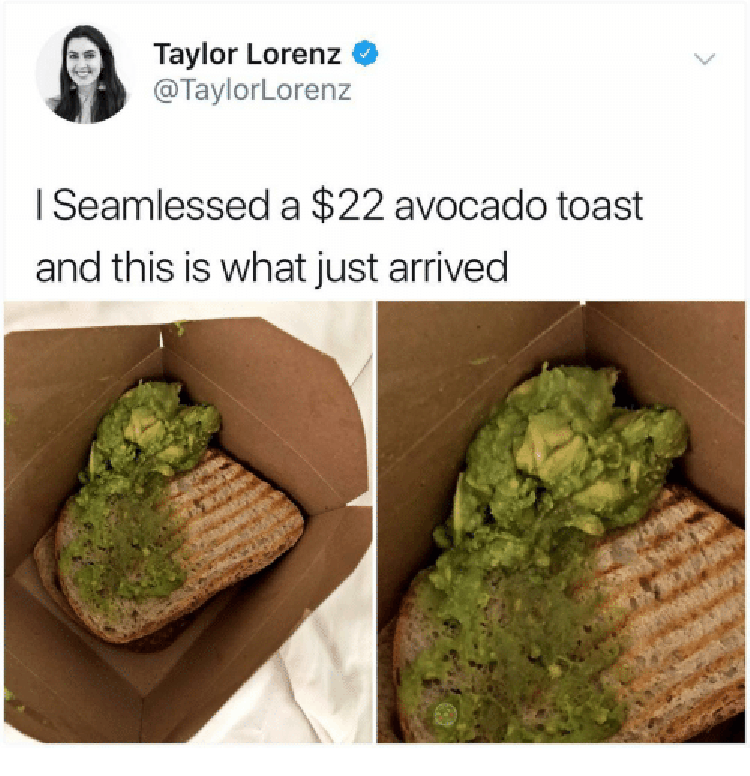 More recently, Lorenz faced ridicule for being a child of privilege who grew up in Greenwich, Conn., and attended an expensive Swiss boarding school. She is currently at the center of a burgeoning East Coast-West Coast rivalry between elite journalists and Silicon Valley tech bros who want to replace the existing media establishment with cryptocurrency and venture capital funds.

These days, in addition to tweeting about boobs and retweeting other journalists who are constantly praising her work, Lorenz is reporting on "hyper-realistic cakes" and the dramatic conflict brewing between "some of the most high-profile teenage influencers ... an event that became known as 'TikTokalypse.'"

They posted clapbacks on Twitter, stoked controversy on Instagram Live and shared cheating accusations using the Notes app. Top YouTubers like Tana Mongeau poured gasoline on the flames by reacting in real time on TikTok.

Shortly after the Sway House boys stepped out of their car and paparazzi crowded around, they were ushered into the 14,000-square-foot Hype House mansion and resolved the feud in private. At 1:20 a.m. the TikTok star Jaden Hossler, 19, tweeted: "we talked. no fighting. it’s settled."

This is the so-called culture at stake in the debate over whether U.S. lawmakers should ban TikTok, the Chinese-owned data-harvesting social media app that recently hired an army of lobbyists to boost its reputation on Capitol Hill. Lorenz has defended TikTok by promoting articles urging Americans to "be wary of xenophobia dressed up as privacy concerns" and making the case that TikTok really isn't that different from Facebook. Which is basically true—if Facebook employees were forced to attend government-sponsored loyalty sessions.

Why are the media obsessed with Taylor Lorenz? Why did the New York Times feel the need to publish multiple interviews with its own reporter? Why is this article so long? Who knows.

Why is Taylor Lorenz the most profiled journalist of the TikTok era? That's an easier question because it's mostly a rhetorical one. And the answer is probably as much an indictment of our culture as of the media themselves. God help us.