An NBC News report that claimed the conservative news and commentary site the Federalist had been demonetized by Google for an article about Black Lives Matter protests was contradicted by Google and the site's publisher.

The Federalist was never demonetized.

The NBC News story initially suggested that the Federalist and Zero Hedge were demonetized because of articles they published. Its lead sentence read, "Google has banned two far-right websites from its advertising platform after research revealed the tech giant was profiting from articles pushing unsubstantiated claims about the Black Lives Matter protests." The story was also erroneously headlined, "Google bans two websites from its ad platform over protest articles."

NBC News has since updated the story's opening sentence to read, "Google has banned ZeroHedge, a far-right website that often traffics in conspiracy theories, from its advertising platform over policy violations found in the comments section of stories about recent Black Lives Matter protests." The headline now states, "Google bans website ZeroHedge from its ad platform over comments on protest articles."

After her article was published, NBC News reporter Adele-Momoko Fraser added, "After publication of this story, Google added that it takes into account all of the content on a website including comments to determine if a policy violation has occurred, which is where the policy violations occurred."

She later added, in a refutation of her article's original opening, "Google notified The Federalist on Tuesday of policy violations. It now has three days to remove the violations before the ban goes into effect." She also wrote that Google had "backtracked," as a spokesman initially told NBC News that the Federalist had already been demonetized.

NBC News acknowledged working in concert with the British nonprofit Center for Countering Digital Hate (CCDH) on the story. The organization "seeks to disrupt the architecture of online hate and misinformation" and counter "fringe movements." It has compiled a list of U.S.-based websites it claims has published "racist articles" about Black Lives Matter protests that could "make millions of dollars through Google Ads."

Fraser also wrote that NBC News had referred Google to the Federalist‘s inclusion in the CCDH's project.

"Google blocked The Federalist from its advertising platform after the NBC News Verification Unit brought the project to its attention," she initially wrote. That sentence has now been deleted.

The story, a project of the London-based NBC News "Verification Unit" against misinformation, has not added an editor's note to alert readers to its multiple corrections.

On Twitter, Fraser thanked the CCDH for its "collaboration" and appeared to celebrate the consequences for the two websites.

"Thanks to @SFFakeNews and @CCDHate for their hard work and collaboration! #BlackLivesMatter," she tweeted. She later deleted the tweet and reposted the same message, but with #BlackLivesMatter taken out. 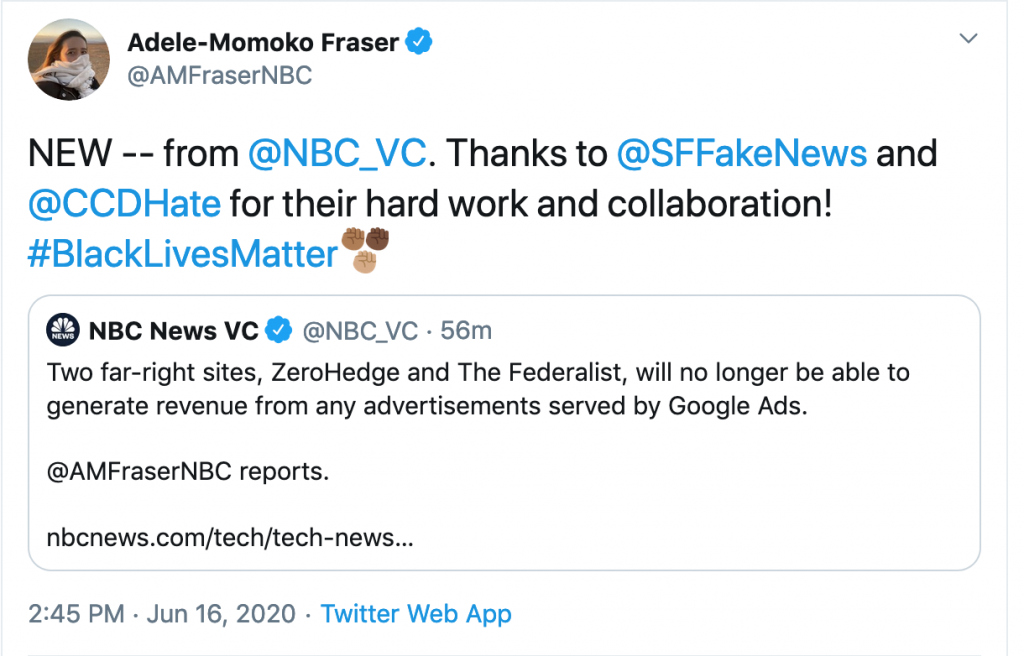 Fraser did not respond to a request for comment.