Oregon Dem Chains Himself to Mailbox to #Resist USPS Changes

Rep. Peter DeFazio (D., Ore.) chained himself to a mailbox in an effort to "resist" the Postal Service's operational changes. Out-of-use mailboxes have gone viral among liberals on social media who claim they are evidence of voter suppression.

"They’re trying to tear apart our Postal Service piece by piece. But Peter DeFazio is defending our right to vote (and every mailbox in America)," he added.

DeFazio's display comes as pictures of mailboxes have gone viral among liberals alleging that Republicans are removing them en masse to suppress the vote. In reference to one viral picture, PolitiFact revealed the mailboxes were being refurbished by a company that has a contract with the Postal Service. PolitiFact rated the claim that this picture revealed efforts at voter suppression in Wisconsin "False." And in Rep. DeFazio's home state of Oregon, Postal Service spokesmen said mailboxes were being removed either because they were vandalized and needed to be replaced or because they were no longer needed.

The congressman's video shows him standing next to one of the Postal Service's signature blue mailboxes with a chain draped loosely around his shoulders. It is unclear whether the congressman intended to really hold the mailbox down or the chain was meant as a symbolic gesture.

Democrats and the media have made much of the Postal Service's recent cost-cutting measures, such as holding pieces of mail that arrive late until the next day, decommissioning letter-sorting machines, and removing little-used mailboxes. Democrats and members of the media have said these measures exemplify collusion between President Donald Trump and the Postmaster General Louis DeJoy to suppress the vote.

The outcry picked up speed when former president Barack Obama delivered his eulogy for congressman and civil rights icon John Lewis, accusing those in power of "undermining the Postal Service in the run-up to an election that's going to be dependent on mail-in ballots so people don’t get sick."

Speaker of the House Nancy Pelosi (D., Calif.) reconvened the House for a rare Saturday vote on a bill delaying any changes to the Postal Service until after the November election and providing $25 billion in funding. But the postmaster general announced Tuesday that the Postal Service would pause cost-cutting measures.

"To avoid even the appearance of any impact on election mail, I am suspending these initiatives until after the election is concluded," DeJoy said in a statement.

DeFazio is running against Republican and former Army National Guard soldier Alek Skarlatos. Skarlatos is best known for helping stop a terrorist attack on a train headed for Paris in 2015, an event Clint Eastwood turned into the film 15:17 to Paris. 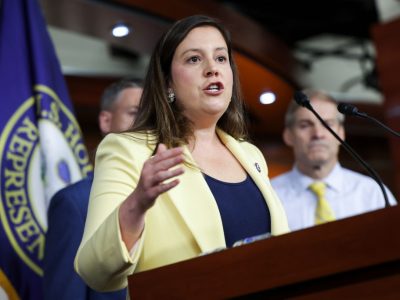